After dropping the first of a three-game series in a 17-1 blowout, the Florida baseball team evened the series with an 11-10 win Saturday afternoon.

Logan Shore took the mound for the Gators, tossing seven shutout innings to get the win. The freshman righty had run support from his teammates, who tacked on nine runs on a season-high 17 hits, during his outing.

Seven of the nine starters for Florida plated a run. Out of those seven, juniors Taylor Gushue and Zack Powers contributed with a home run each.

As soon as the Gators relieved Shore, the Wildcats answered back with a booming eight-run eighth inning forcing the Gators to reach into their bullpen multiple times.

After surviving a rough eighth inning, the Gators tacked on two nsurance runs in the top of the ninth; this proved critical as the Wildcats added two runs in the bottom of the ninth before freshman left-hander A.J. Puk closed out the game, collecting his first save of the season.

The Gators hope to take the series finale set for noon Sunday when No. 19 Kentucky sends out junior righty Andrew Nelson to face a Gator starter to be announced. 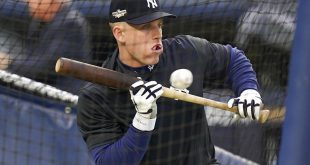