The sixth-ranked Gators softball team took advantage of three home runs to beat 19th ranked Auburn 7-6 on Saturday. The Orange and Blue scored seven or more runs for the fifth time in SEC play to support junior Lauren Haeger, who improved to 7-1 in relief of freshman Delanie Gourley.

Senior Hannah Rogers pitched the seventh inning to earn the save for the Gators (33-8, 7-7 SEC), her first of the season and her first since June 1, 2013, when she worked the final frame of Florida’s 15-inning win over Nebraska at the College World Series.

Auburn (31-8-1, 6-5 SEC) loaded the bases with no outs in the first, but Gourley retired three straight batters to get out of the jam. In the bottom of the frame, the Tigers hit freshman Chelsea Herndon with a pitch and walked Haeger before senior Stephanie Tofft slugged a three-run home run to right field that gave Florida a 3-0 lead.

Gourley issued a two-out walk in the second, but induced a fielder’s choice to retire the Tigers. Sophomore Taylore Fuller walked to lead off the bottom of the inning, and then advanced to third on two wild pitches before coming home on an RBI double by sophomore Kelsey Stewart. Stewart’s double in the second increased her reached-base streak to 41 games, extending her single-season program record.

Auburn tied the game at four with a pair of two-run home runs to center field in the third inning before sophomore Kirsti Merritt put the Gators back in front with a solo homer off the flagpole beyond the center-field wall to start the bottom of the frame. Haeger replaced Gourley in the circle for the fourth inning.

A leadoff walk proved costly for Florida as Auburn tied the game at 5-5 in the fourth. Sophomore catcher Aubree Munro walked to lead off the bottom of the frame, but she was stranded at second. Haeger set the Tigers down in order before the Gators offense produced two runs in the fifth. Merritt put the Gators ahead with her second home run of the game to lead off the inning, followed by a single from Haeger and an RBI base hit up the middle by sophomore Taylor Schwarz that scored junior pinch-runner Jessica Damico.

Haeger hit one batter and walked another with two down in the sixth, but got out of the inning with a foul out. Freshman pinch-hitter Justine McLean drew a two-out walk in the bottom of the frame, but she was stranded. Rogers entered to close out the game for the Gators, limiting Auburn to one run to save the win for Haeger and secure the series victory for Florida.

After the two homerun performance, Merritt was asked about hitting one off the flagpole in center field.

“Once in a lifetime, never again will I hit the flag pole. I actually thought that it hit the wall and I was wondering why the ball was still in play and I kept running then the umpire told me it was ok to slow down, that the ball went over.”

When asked about the most recent message sent among the team for inspiration, Merritt replied laughing, “Taylor Schwarz sent us a Miley Cyrus song: “Do My Thing.”

Stephanie Tofft was also another big piece in the victory, adding a long ball of her own. She explained the team’s mindset coming into the final game of the series.

“It’s the same as it was before, were just getting it done now, we are making adjustments, making plays. We are just out here to win and playing our hardest.”

The victory gave Florida its first SEC series victory since LSU back in mid-March.

First pitch for Sunday’s game is set for 1 p.m.

To hear more post-game comments from Head Coach Tim Walton and a few players, click on the links below:

Merritt talks about the team bouncing back from the previous skid

Merritt talks about hitting the flagpole in center field

Merritt talks about the changes she’s made in her swing

Walton discusses the victory on Saturday

Walton talks about Merritt’s performance at the plate

Walton talks about the benefits of a young club 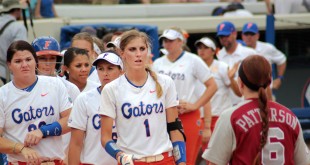 The Gators Women’s Softball team has always been successful throughout their season, especially during the …