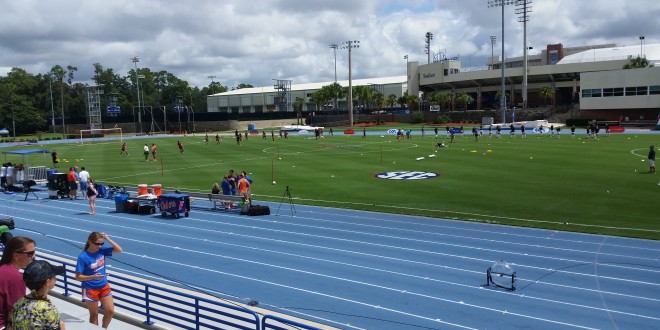 Forward Savannah Jordan and midfielder Betsy Middleton both scored goals on the afternoon to dispatch the Tigers.

Florida improves its record to 10-3-1 overall and to 4-2-1 in SEC play.  The Gators are now fourth in the SEC and have won two conference games in a row after beating Tennessee on Friday.

The Gators opened the scoring on the afternoon when midfielder Betsy Middleton received the ball from a rebound and scored from 15 yards at 23:13. Forward Brooke Sharp notched an assist on the third goal of the season by Middleton.

Middleton talks about opening the scoring in the match.

“It was just a quality ball in and a very good effort by some other people in the box to get it in. Fortunately the defender cleared the ball directly into my path. All I had to do was pick my head up and put it in the corner. The reason it happened was because of our quality one-two touch rhythm down the field.”

Almost immediately after halftime, the Orange and Blue extended its lead to 2-0 at 49:49 when forward Savannah Jordan scored off a through ball from defender Claire Falknor. Jordan with that goal increased her goal tally on the season to 14 as she leads the team and the SEC in goals scored.

LSU had a few dangerous chances in the first and second half. One of their shots was cleared off the line by defender Claire Falknor to not allow a goal, while another shot from LSU hit the woodwork, but didn’t go in. The Tigers finally got on the scoreboard when a shot by Lexi Gibbs gets redirected from eight yards out into the net with a little more than two minutes left in the match.

“My biggest frustration is that we were a minute and a half away from a shutout, which we desperately want,” she said.

That goal ended UF’s bid to earn a shutout conference victory in the SEC; the Gators do have two shutouts against UCF and Jacksonville, both coming on the road.

Despite the win, Florida’s Savannah Jordan said the team had other opportunities.

“I think we had a lot of chances, and again that’s something that we can continue to grow off of. We want to win, and are happy with the win, but we had a lot of chances that we could have put away. The keeper made some great saves, their defenders got in there and made some great saves as well. That’s something we can continue to work on and put some more away.”

Florida is looking to extend the winning streak to three games as the Gators will travel to Starkville on Friday to face Mississippi State at 7 pm.