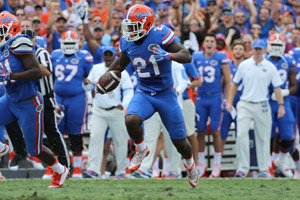 Taylor has scored a touchdown in every game this season

The 2015 Gator football season has been anything but normal.

No one would have expected the Gators to turn around after two seasons of less than stellar performance and come out of the gate 6-1 in 2015 under new head coach Jim McElwain.

Florida came out of their games against both New Mexico State and East Carolina University with the W but not after some hardship. The Gators beat New Mexico State by a wide margin of 61-13 but only won by a small margin the following week against ECU 31-24. Head coach Jim McElwain called the game against ECU “embarassing”, not to mention the numerous penalties acquired by the team and the controversial scolding by McElwain of running back Kelvin Taylor.

However, as the season continued still without a set starter at quarterback, McElwain extended Florida’s dominance over both Kentucky and Tennessee. Florida prolonged winning streaks against Kentucky (29 games) and Tennessee (11 games).

Florida went into the Ole Miss game ranked 25th in the AP poll. This was the first time the Gators had been ranked in the top 25 since the 2013 preseason poll.

The Gators, with quarterback Will Grier, dominated the third ranked Rebels 38-10, stunning the nation. The following day, the Gators then shot up in the polls to number 11. The Gators traveled to take on the Missouri Tigers, and won on the road 21-3.  Florida would next play LSU as the eighth ranked team in the country according to the AP poll.

Then, the Monday before the LSU game, the news broke that quarterback Will Grier was suspended for an entire calendar year for testing positive for PED’s. The team then traveled to Baton Rouge to take on the Tigers with Treon Harris in at quarterback and suffered their first loss of the season 35-28.

“Our guys competed their tails off. There’s a lot of Gators out there to be proud. That was a good football team we were just beaten by but that being said, we have a lot of ball to play and I really like this football team,” said head coach Jim McElwain.

The Gators now have a bye week before traveling to Jacksonville to take on the Georgia Bulldogs on October 31.

“The bye week’s coming at a heck of a time. You know we’ve had a seven game, pretty physical long stretch. You know we need to get our bodies back and get ready to go to Jacksonville,” said McElwain.

Click here to listen to coach McElwain talk about the bye week. McElwain 2

Previous Cubs vs. the Mets in Game 3 of NLCS
Next Challenging times for the Jaguars

There are 32 head coaches in the NFL, but only four of them are a …