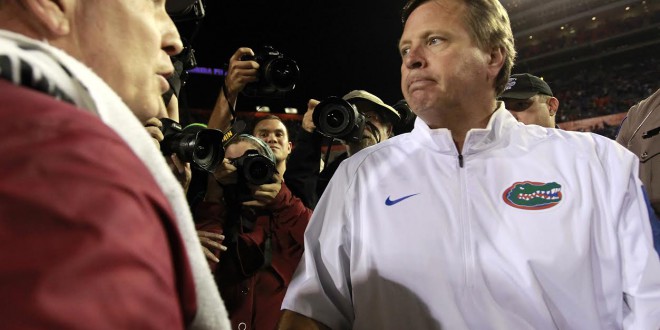 Jim McElwain and his team are certainly disappointed with how their team played vs. FSU last week, but this upcoming weekend, they have their biggest challenge of the season. This Saturday, the Gators will travel to Atlanta to take on the Alabama Crimson Tide, who are currently ranked second in the nation in the SEC Championship Game.

The last time the Gators were in the SEC Championship was in 2009, when McElwain was on the other sideline as Alabama’s offensive coordinator, helping coach the Mark Ingram led offense to a 32-13 win over Florida, and a national championship to follow in the weeks after.

This time, the match up pits master versus prodigy, as McElwain won’t just be a coordinator alongside Nick Saban, but the head coach of the SEC East champion Florida Gators, trying to lead UF to their first SEC Championship victory since 2008, a year where they also won a national championship behind Tim Tebow. McElwain gave praise to Alabama in his press conference this week, even calling them the best college football program in the last eight years.

One of the Gators’ biggest challenges in the SEC Championship will be limiting Alabama running back Derrick Henry as much as possible. Henry currently leads the FBS in rushing yards with 1,797 to go along with his 22 touchdowns on the season. McElwain made sure to note how important it was to stop Henry on first contact, and not let him pick up extra yards. Henry currently averages 101.6 yards per game after contact.

Not only will McElwain and the Gators have a potent rushing attack to holster, but an Alabama defense that not only limits your offense, but can score as well. To go along with their stellar front seven, which has helped limit offenses to 4.13 yards per play, currently second best in the FBS, the defense has also forced four pick sixes on the season.

While injuries were certainly a factor in limiting the Gators this past weekend against the Seminoles, McElwain said Florida can’t use it as an excuse for losses, as most teams are pretty banged up this late in the year. Coach Mac also noted the team is doing all they can to make sure guys are at least able to give it a shot this coming Saturday.

As for quarterback Treon Harris, McElwain believes his signal caller has done a solid job, and is happy to have him as the Gators’ quarterback. McElwain also discussed how changing their game plan schematically will greatly benefit their offense as a whole.

In his first season with the Gators, Coach McElwain has so far led the team to an 10-2 start, the best by a rookie head coach in program history. With an SEC championship on the line Saturday, McElwain hopes to be on the same side of things that he was on 2009…the winning side.