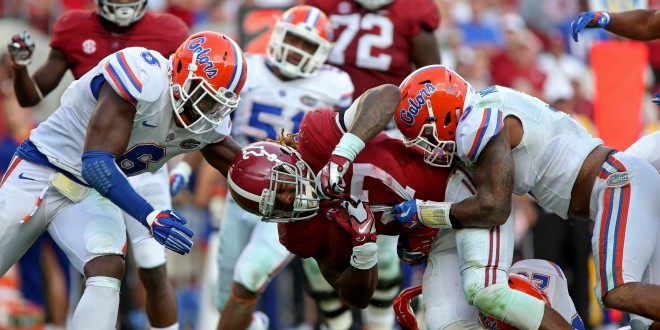 5 Keys to a Gator Victory Over Alabama

The 18th ranked Florida Gators (10-2, 7-1 SEC) are big underdogs versus the 2nd ranked Alabama Crimson Tide (11-1, 7-1 SEC) heading in to Saturday’s SEC Championship game. Here are 5 keys to the game that the Gators need in order to pull the upset in Atlanta:

1. Win the Turnover Battle by Two

The Gators rank first in the SEC in turnover margin averaging just under one per game (.83). In three out of the last four games, Florida has lost or tied in the turnover battle after having won the turnover battle in six of their first eight games. When forcing turnovers, the Gators have made the most of them totaling 88 points, good for third in the SEC.

Alabama has thrown ten interceptions this year, eighth most in the SEC, while Florida is second in the conference having picked off 14 of their opponent’s passes. While the Tide have struggled with what Florida head coach Jim McElwain calls “throwing it to the right color jersey”, they’ve done a good job hanging on to the football having lost only 6 fumbles, good for sixth in the conference. The Gators are tied for second in fumble recoveries with ten on the year.

Alabama has only had five games that have been decided by fewer than two touchdowns this season. In four of those five games, the Tide have lost or tied their opponent in the turnover battle. With the Gators having struggled offensively in their past several outings, turnovers by the defense could allow Florida to put a couple of “cheap points” on the board.

This matchup between the Gators and the Crimson Tide features two of the slowest teams in the SEC, only Arkansas holds the ball longer than these two. Florida averages close to 33 minutes of time of possession per game while Alabama averages just over the 33 minute mark per game.

The Gators have lost the time of possession battle twice this season, versus Tennessee and on the road against LSU. If Florida’s offense can stay on the field, the defense will have more time to rest and stay fresh against a tough, powerful rushing attack.

In last week’s game, Florida limited Dalvin Cook, the nation’s second leading rusher in yards per game, to just 33 yards through the first three quarters. Cook finished with 183 yards after a 150 yard fourth quarter. If Florida is unable to extend drives and stay on the field, they risk the defense wearing down against Heisman front runner, Derrick Henry.

3. Stop Henry Before He Gets Going

According to Pro Football Focus, in Henry’s nine games this season versus Power-Five opponents, 978 of his 1,581 rushing yards have come after contact. But, according to Football Outsiders Innovative Statistics, this will be the best defensive line that Henry will have faced.

Florida has compiled a 26.3% stuff rate on the season, which is defined as the percentage of carries by a running back that is stopped at or before the line of scrimmage. That percentage ranks eighth in the country. The Gators have also only allowed 111 rushing yards per game, second best in the SEC. Florida has to find a way to make contact with Henry before he gets going downhill.

Arguably one of the most dangerous weapons the Gators have in their arsenal is red shirt sophomore punter Johnny Townsend. The Florida punter is averaging 43 net yards per punt, best in the SEC and third in the country. His right leg and Florida’s punt coverage unit will need to attempt to contain Alabama punt returner Cyrus Jones, who returned three punts for touchdowns in the month of November and averages 14 yards per return. Townsend might just have the ability to do so.

69% of @johnnytownsend1's punts have been fair caught or landed inside 20. Among the best in the country — particularly 2nd half of season

Alabama’s JK Scott averages over 43 yards per punt, but the coverage unit allows over eight yard per return, which ranks the Crimson Tide 69th in the country in punt return defense.

5. Find A Way to Stay Balanced on Offense

The Alabama Crimson Tide rank first in the SEC and the nation in rushing defense allowing 79 yards per game. The Gators have relied on running back Kelvin Taylor to move the football over the past several weeks. Taylor has eclipsed the century mark in rushing yards in four out of the last five games while the Alabama defense has not allowed a 100-yard rusher since October when Georgia’s Nick Chubb totaled 146 yards with the majority coming on an 83-yard touchdown run.

Even if the the Tide front seven is able to corral Taylor to under 100 yards, the Gators still have to find a way to make the defense respect the threat of the run including allowing quarterback Treon Harris to use his legs. In three games versus the top rushing quarterbacks in the SEC, Joshua Dobbs (Tennessee), Dak Prescott (Miss. State), and Chad Kelly (Ole Miss), Alabama has surrendered 55 rushing yards per game to the quarterback prior to subtracting sack yardage. While it doesn’t seem like much, it’s 22 yards shy of what their defense normally allows per game. Harris’s running ability help spread the defense out and allow more running lanes for Taylor.

It won’t be easy for the Florida Gators, but if they can execute these five elements in the game, they may have a chance in bringing down the heavily favored Crimson Tide.

22 years old from Pensacola, FL. Telecommunications major at the University of Florida with a focus on Sports News, also pursuing a minor in Communication Studies.
@yancey_dewayne
Previous Gator Great Chris Doering Reviews Gators, Upcoming SEC Championship Game
Next Florida Volleyball Sweeps in Round One Against New Hampshire, Next Up is FSU

After a successful regular season campaign, the Tennessee Titans came into the postseason with an …