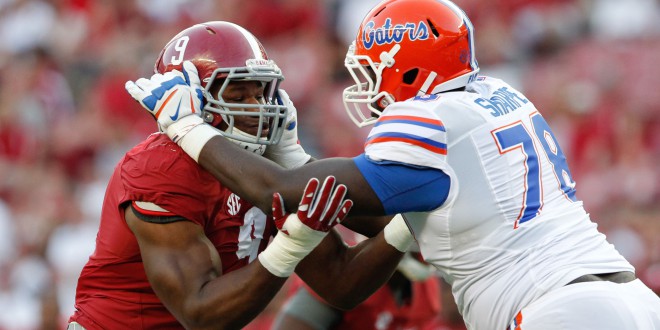 The Florida Gators and the Alabama Crimson Tide will once again play against each other this Saturday afternoon for the SEC championship.

The last time both teams played against each other in Atlanta was back in 2009. Eventual Heisman trophy winner Mark Ingram and the Crimson Tide defeated Tim Tebow and the Gators 32-13 that day.

SEC Network analyst Chris Doering is no stranger to this historic SEC championship rivalry. The former Gators wide receiver was a part of the Gators first four SEC championship appearances, including the first three against the Crimson Tide between 1992 and 1994. Considered as one of the greatest receivers in Gator football history and a three-time SEC champion, Doering is impressed with what head coach Jim McElwain and his staff have been able to accomplish this season.

This will be the first time the Gators have competed in the SEC championship since the crushing defeat to the Crimson Tide in 2009. It is also the first time since 2009 that the Gators have won seven conference games in a season and have swept the SEC East. A lot of that, according to Doering, is due to the culture change installed by McElwain and his coaching staff this season.

Since the start of November however, the Gators offense has been anything but stellar. Since their 27-3 victory against Georgia on Halloween, the Gators have only more than 20 points once in their last four games. Recently the Gators failed to score on offense and relied on their defense to score their only in a 27-2 home defeat to in-state rival Florida State.

While the Crimson Tide averaged 36.5 points per game since the start of November, Doering believes that both offenses are not that entirely different from each other.

Since Tebow graduated, the Gators have been unable to find stability at the quarterback situation. Since the start of the 2010 season, the Gators have had seven different quarterbacks start on offense. No Florida quarterback has thrown for more than 15 touchdowns in a season and only one (John Brantley) has been able to eclipse more than 2,000 yards passing during that span.

With the recent struggles of sophomore quarterback Treon Harris and the offense’s inability to consistently put up points, Doering thinks that McElwain and Florida offensive coordinator Doug Nussmeier may run some unconventional offense this weekend.

The Crimson Tide are currently bidding for a spot in the college football playoffs for the second straight year. The Gators are currently bidding for a berth in the Allstate Sugar Bowl. While Doering believes that the defense will need to have one of its best games of this season this weekend, he expects McElwain to go all out on offense this week.

Coverage starts at noon this Saturday on ESPN Gainesville 95.3 FM. Kickoff begins at 4:00p.m. on CBS.

Previous Volleyball Preview: Gators Enter First Round of NCAA Tournament Play
Next 5 Keys to a Gator Victory Over Alabama