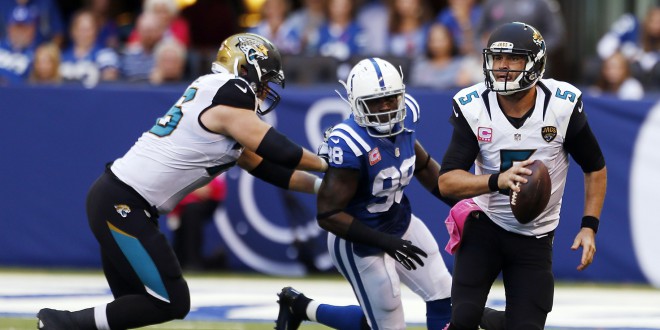 The Jacksonville Jaguars (4-8) will host the Indianapolis Colts (6-6) for an AFC South match-up this weekend. Both teams are coming into the game off of loses and the Jags are looking to avoid a three game losing streak.

The first time these two teams met this season in Indianapolis, the Colts pulled out a 16-13 win in overtime. Sunday’s game will most likely also be close, the Jags have shown that they can beat teams like the Colts, but they also have shown they have trouble finishing games in the fourth quarter. Jacksonville quarterback Blake Bortles says the Jags vow to finish the last four games of the season strong.

Even though the Jags suffered a disappointing loss to the Tennessee Titans last Sunday, the team had an impressive offensive day. Wide receiver Allen Robinson and Blake Bortles both set franchise records for touch downs. Robinson broke wide receiver Jimmy Smith’s record of 10 and and Bortles broke quarterback David Garrard’s record of 23. Bortles says there is evidence that the offense is getting better and there are obvious signs of improvement.

If the Jags offense plays the way they did last weekend, and minimizes mistakes, they have a good chance of beating the Colts.

Both teams have been dealing with injuries this season. For the Jags, Wide receiver Allen Hurns practiced on Wednesday and has fully recovered from a concussion. Linebackers Paul Posluszny, who had surgery for a fractured right hand, and Dan Skuta, who has missed two games, are both probable to for this weekend and have not been ruled out. For the Colts, quarterback Matt Hasselbeck has practiced for two straight days and should be availalbe to play in Jacksonville.

The Colts will travel to play the Jags at Everbank Field at 1:00 p.m. on Sunday.