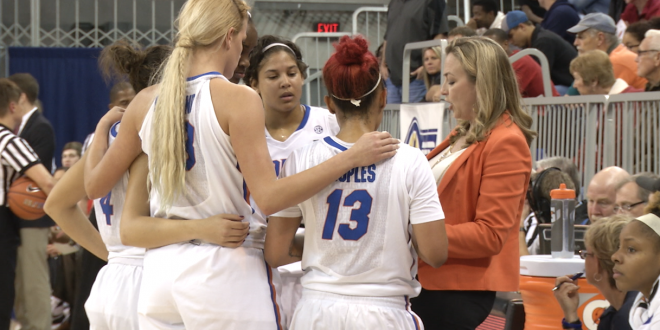 GAINESVILLE, Fl– At the final buzzer, the Georgia Bulldogs unleashed a 71-61 upset story over the 20th-ranked Florida women’s basketball team in Gainesville on Thursday night.  The Gators were “Dome, Sweet Dome,” but the Bulldogs’ bark was too much.

Florida won the tip-off and with big plays from Carlie Needles and Ronni Williams, the Gators went for an early 4-0 run. However, the Bulldogs quickly responded.

For the remainder of the game, the Gators would play catch-up to the Bulldogs. Florida shot 29 percent from the field compared to Georgia shooting 68 percent at the end of the first quarter. At this point, Georgia had a 19-10 lead over the Gators, and you could say the Dawgs continued to mark their territory all over the court. Florida’s head coach, Amanda Butler, gives credit to Georgia for knocking the Gators off of their game.

Florida found a way to stop Georgia’s hot-shooter, Shacobia Barbee, by only allowing her a total of five points. But, Florida did not find a way to stop Tiaria Griffin. Griffin accumulated 23 points, three rebounds, and three defensive steals. Georgia’s Halle Washington, also had herself a night with 17 points and seven rebounds.

Shots were fired off from Florida all night but their aim and accuracy were off for most of the night. Georgia took complete advantage and control over Florida’s miscues. At the half, Gators’ freshman sensation, Eleanna Christinaki was in foul trouble and the Bulldogs had a 33-22 lead to head into the locker room. The Rowdy Reptiles were still chomping and screaming in the bleachers because everyone has picked up on Florida being a second-half team.

Every time the Gators made a move to chomp down on the Bulldogs’ lead however, Georgia added more points, until the fourth quarter.

There is just something about this group of Gators this season and playing in the fourth quarter. In the final minutes, the Gators began to poke their heads out of the water and try to come up for air. Florida’s Cassie Peoples was the spark the Gators were looking for the entire game. Peoples, with fiery red hair, got hot from behind the perimeter; her speed got her through the Dawg traffic too and she finished the night with 15 points.

With 48.6 seconds remaining in the game, The Gators came within six points of Georgia; the speakers blasted “Living on a Prayer” with final seconds on the clock, but that wouldn’t help.  Florida sunk too deep, in the beginning of the game, to finish a comeback.

Georgia defeated Florida, 71-61. Amanda Butler says this is SEC play and she already looking forward to playing again on Sunday.

Georgia came into this game winless against SEC opponents this season. The Gators have a chance for revenge on February 21st when Florida crosses the Georgia line to meet the Bulldogs again.

On Sunday at 2 pm, the Gators and LSU Tigers meet at half court in the O’Dome.

A senior at the University of Florida reporting on Gator sports, local Gainesville and surrounding area sports, and telling the stories of local athletes. Born and raised in Gainesville, Florida with a passion for telling people's stories and having fun doing it.
@SportsDarwinism
Previous PREVIEW: Gator Women’s Basketball Hosts SEC-Rival Georgia
Next Mike White Anticipates Return to Oxford, Florida Men’s Basketball Gets Ready for Ole Miss