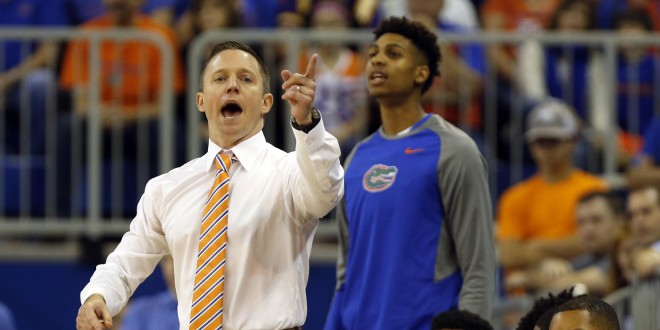 On Saturday night, Mike White will return to Oxford, Mississippi, a town both familiar, and appreciative of the Florida basketball head man. White’s Florida Gators (10-6) take on the Ole Miss Rebels (12-4) Saturday night at 8 P.M., and while many eyes will be on the court, Gator and Rebel fans alike will make sure to keep an eye on Florida’s head coach.

White, before being named the head basketball coach at the University of Florida, both previously played and coached at Ole Miss. White played in 117 total games with the Rebels, starting four years at point guard, and leading Ole Miss in assists every year he played in Oxford. White currently ranks eighth in assists all-time at Ole Miss.

On the sidelines, White served 230 games as an assistant coach for the Rebels between 2004-2011. Despite leaving after the 2010-2011 season to take over as head coach at Louisiana Tech, White talked about how excited he is to return to Oxford, and how fond he is of his previous home.

Saturday will be more than just Mike White’s homecoming, it will be another tough, in-conference road game for UF, as they try and prove their worth to keep their NCAA Tournament dreams alive. The Gators are coming off of a tough 71-68 loss to Texas A&M in College Station, where Chris Chiozza’s potential game tying three-pointer fell just short, giving the Aggies their 14th win of the season. While Florida is 2-2 in SEC play this year, both of their wins have come at home as the Gators look to pick up their first SEC road win in a place they’ve won three of their last four match ups.

The Gators will have to prepare for a familiar foe in Ole Miss senior guard Stefan Moody, who in the last game between Florida and Ole Miss, knocked down a three-pointer from way beyond the arc with 2.7 seconds left to give the Rebels the victory. Moody is leading Ole Miss this season in scoring and dimes, with 24.4 points per game and 4.1 assists per game. Moody ranks fourth in the NCAA and first in the SEC in scoring, and in his last five games, has averaged 25.8 points per game on 46% shooting from the field, while knocking down 37.6% of his looks from downtown. Coach Mike White described him as “in range when he gets off the bus.”

Second on Florida’s defensive checklist is lengthy junior forward Sebastian Saiz. Saiz ranks 22nd in the nation and second in the SEC with 10.1 rebounds per game, while also averaging a solid 12.5 points per game on 52.8% shooting. Saiz was tasked with defending LSU forward, and potential number one pick, Ben Simmons in the Rebel’s last game, and was able to limit the budding superstar to a meager 15 points and six rebounds.

Florida holds a 10-6 record on the season, and has gone 2-2 in conference play, but Coach White and the Gators know they still have improvements to make. The Gators now rank 339th out of 346 teams in the NCAA in free throw percentage. Florida is shooting an abysmal 60.6% from the charity stripe, and has only two players in its starting lineup shooting above 70% from the free throw line. In an attempt to try and curtail the team’s downward spiral towards ranking last in the NCAA in free-throw percentage, Coach White has been running his “80%” drill. In this drill, at any point during practice, at the blow of a whistle the team must stop whatever they’re doing, and in two minutes time, make at least 80% of their free throws. White said that the team hasn’t missed their quota in two to three weeks, but despite their efforts, have only shot 55.2% from the free throw line in their last five games.

While Florida has struggled shooting the ball from anywhere on the court, going 41.5% from the floor and 29.0% from beyond the arc, the Gators’ defense and rebounding has kept the team in games. Florida has limited its opponents to 63.9 points per game this season, good enough for 24th in the nation. On the boards, the Gators rank 16th in the nation with 42.1 rebounds per game, and 15th in the nation with 14.4 offensive rebounds per game. Leading Florida in the rebounding battle is forward Dorian Finney-Smith with 7.6 boards per game, while also adding a team leading 13.4 points per game. Center John Egbunu and forward Devin Robinson have also been helpful adding 6.5 and 6.4 rebounds per game respectively.

The Gators have gone 62-45 in program history against the Rebels and have won six of their last 10 against Ole Miss. Nonetheless, seven of the last eight meetings between the teams have been decided by six points or fewer. If Florida can win an important road game in Oxford, they’ll improve to 3-2 in conference play, and set themselves back on track.