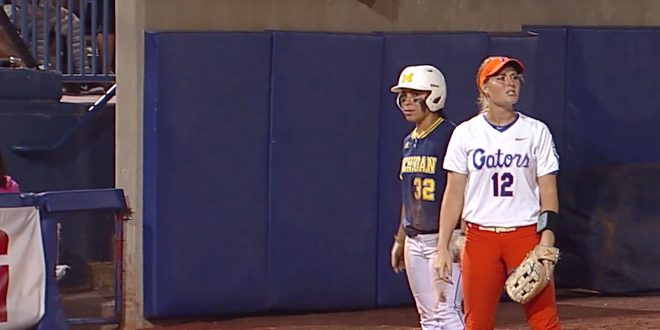 The top ranked Florida Gator Softball team is hungry for yet another NCAA Championship Title.  The back-to-back Women’s College World Series Champions finished 60-7 and 18-5 in the SEC last season.  All but one of those losses (Michigan in the WCWS) came in SEC play.  The Lady Gators are practicing daily in order to be prepared for their upcoming 2016 season.  The team faces a challenging schedule with seven SEC teams ranked in the USA TODAY Preseason Top 25 Poll.

The Gators lose Lauren Haeger, WCWS most valuable player and the 2015 national player of the year.  Haeger was the first player in collegiate softball history to win at least 70 games as a pitcher (73) and also hit 70 home runs (71).

Although Haeger is a tough loss the the Gator lineup, veteran leadership is very evident at practice.  The Gators have eight players returning to the team with a combined record of 115-19 over the past 2 seasons.  Senior Taylore Fuller says she believes the 7 freshman players are prepared for the game, and she is excited for them to take the field for the first time.

Freshman Amanda Lorenz committed to the Gators four years ago, as a freshman in high school, says she is eager to wear her uniform and play for the Orange and Blue.

The Gators begin their season in Tampa, FL in the USF Wilson-Demarini Tournament Friday February 12 against Illinois State.

@@ckeesler_sports
Previous SEC PREVIEW: Ole Miss vs. Missouri
Next Next Up, the SEC Championships for Swimming and Diving