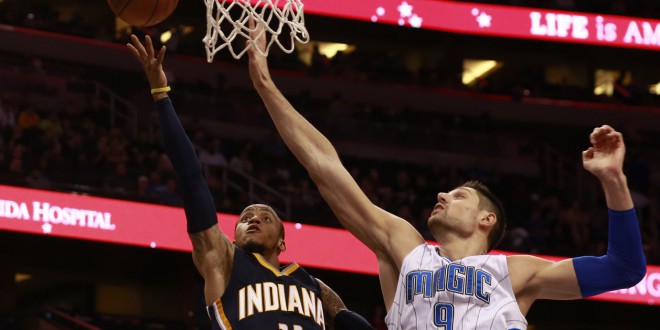 Sunday night ended in another close loss for the Orlando Magic as they fell at home to the Indiana Pacers 105-102. The Magic have now gone 4-6 in their last ten games after winning only two games in the month of January.

The game was close throughout, with both teams tied up at halftime and the Pacers having a one point lead at the end of the third quarter. With the game on the line it was  guard Victor Oladipo who took, and missed the potential game winner with three seconds left on the clock. The shot wasn’t indicative of Oladipo’s performance, as he did it all for the Magic contributing 17 points, seven rebounds and eight assists.

Shooting woes plagued the Magic as they struggled from the field making only 38 of 91  and shot 65 percent from the charity stripe as a team. Oladipo believes that the team’s poor shooting and defensive errors contributed towards the loss.

The Pacers were led by Monta Ellis and Paul George who scored 21 and 20 points respectively while the Magic were led by Fournier’s 23 points and Nikola Vucevic’s 19 points and 13 rebounds.

Trade deadline additions Brandon Jennings and Ersan Ilyasova continue to work their way into the Magic’s rotation. Jennings has out preformed  second year guard Elfrid Payton in the pas two outings, while Ilyasova hasn’t been consistent, scoring 16 in his first contest but only managing seven points on 3-9 shooting in his second game.

This loss to the Pacers mark the eighth time this year that the Magic have lost a game by three points or fewer. Magic forward Evan Fournier believes that these close games have shaped their season.

Next, the Magic will look to avenge their early season loss to the Philadelphia 76er’s on Tuesday in Philly starting at 7 p.m..