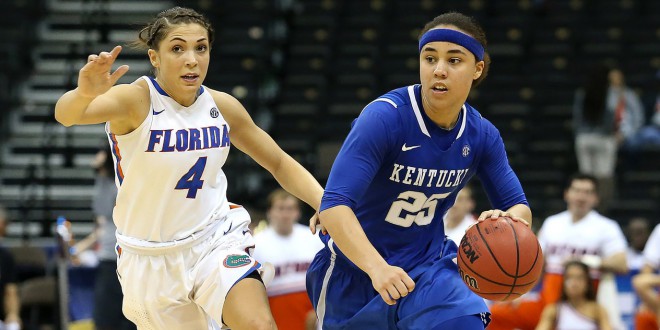 JACKSONVILLE, Fla— On Friday afternoon, the fourth seeded Florida women’s basketball team was knocked out of the SEC Tournament by fifth-seed Kentucky 92-62 in Jacksonville.

This is the first time the SEC Women’s Basketball Tournament has been hosted in Florida, and in a year of many firsts for the Gator women’s basketball team, it seemed as if this could have been a fairy tale ending for the Gators.

However, the Kentucky Wildcats, who are currently on an eight-game win streak, clawed the happy conference ending away from Florida.

The Gators’ Ronni Williams was airborne and won the opening-tip over the Wildcats, which led to Florida executing early. The first quarter was owned by the Gators. Florida dominated on both offense and defense. Carlie Needles squared up from behind the perimeter and fired off a three-ball to add to the Florida momentum. She would later knock down another three-pointer before the quarter came to an end. At the end of the first quarter, the Gators lead the Wildcats, 16-9.

Florida’s defense kept the Wildcats’ Makayla Epps locked away for the first quarter, but that wouldn’t last long.

Kentucky began to spread the floor and locate open looks to keep Florida’s lead in reach. With Epps and Janee Thompson leading the Wildcats, Kentucky found themselves with a two-point lead over Florida at the four-minute mark in the second quarter.

The Jacksonville Veterans’ Memorial Arena was filled with roaring fans representing all 14 different SEC teams. But, when the clock reached 2:30 p.m. it was a battle between the Orange and Blue Florida fans and the blue and White Kentucky fans. Measuring the rowdiness between the two sets of fans, Kentucky was victorious in the rowdy category, which helped the Wildcats rally past the Gators on the court.

The entire second-half was dominated by Kentucky. In the third quarter, three different Wildcats had scored in double digits while Florida did not have anyone in double digits. The foul calls seemed to be in Kentucky’s favor as well and Makayla Epps got hot, shooting well and getting to the free throw line.

Kentucky’s Epps finished her day with 22 points, seven rebounds and seven assists. Janee Thompson was close behind with 19 points while shooting 7-for-13 from the floor.

On the Florida side, Carlie Needles was leading the way with 15 points off of five different three-balls that ties the record for most three-pointers in an SEC Tournament game. She’s tied with teammate Cassie Peoples, who tallied up only five points on the day.

In short, Kentucky handed Florida its worst loss of the season while knocking the Gators out of the SEC Tournament, the biggest stage Florida has played on so far this season.

But on March 14th, the NCAA Women’s Basketball Tournament bracket will be announced on Selection Monday. Florida will be patiently waiting to see how high of a seed they receive for the NCAA Tournament.  It will be a bigger stage, and we’ll see if the Gators can bounce back from this tough SEC Tournament defeat.

A senior at the University of Florida reporting on Gator sports, local Gainesville and surrounding area sports, and telling the stories of local athletes. Born and raised in Gainesville, Florida with a passion for telling people's stories and having fun doing it.
@SportsDarwinism
Previous Florida Men’s Basketball Falls At Home To No. 22 Kentucky
Next Gator Softball Team Remains Undefeated, Picks up Pair of Wins