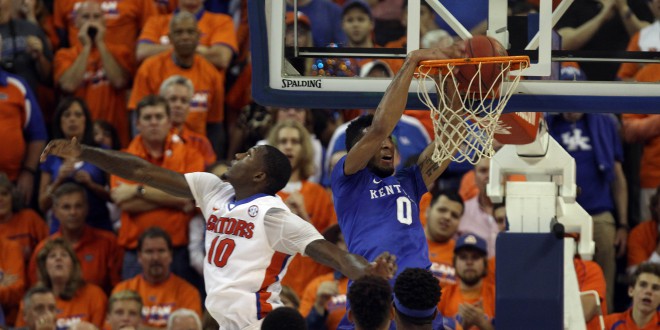 Florida Men’s Basketball Falls At Home To No. 22 Kentucky

GAINESVILLE, Fla— On Tuesday night, the final whistle blew and the game clock hit zero. The Florida men’s basketball team left the court defeated by the No. 22 Kentucky Wildcats, 88-79 and with it, perhaps their NCAA Tournament hopes as well.

The Stephen C. O’Connell Center was filled with Gator fans dressed in the color orange to pay respect to the last game played in the O’Dome before renovations begin in earnest and also because there was a good amount of Kentucky fans in attendance, dressed in blue.

The opening-tip was won by the Wildcats and they did not waste any time getting to the basket. But, Florida did not allow them to get too far ahead. After Kentucky scored, the Gators rolled down the court to put points on the board as well.

With seven minutes left in the first half, Kentucky went on a derby run and started to pull away from Florida, building a 32-18 lead. The Gator guards, Kasey Hill and Chris Chiozza were shooting 0-9 at this point, and ended the game shooting a combined 4-17 from the floor.

At the half, the Gators started to get their chomp back and were only trailing 36-32 at halftime.  Florida found a way to spread the floor and forced Kentucky to foul them, but the Gators missed 10 free-throws going into half-time, and for the game, the Gators shot poorly from the line, hitting just 16 of 37 from the stripe. Florida’s coach, Mike White stresses the importance of practicing free-throws.

Florida’s John Egbunu‘s career-high 27 points and monster dunks kept the Gators within reach of the Wildcats throughout the duration of the game. But, Kentucky was able to hold Florida off by shooting 71.9 percent from the free-throw line.  Guard Jamal Murray scored 21 points to lead five Wildcats in double figures in scoring.

The Gators were 3-16 from the three-point line, until Dorian Finney-Smith drilled one from downtown to cut Kentucky’s lead down to 85-74 with 30 seconds left in the game. Finney-Smith compiled 15 points, five rebounds and five assists on his Senior Night.

Despite the loss, Florida coach Mike White thinks his Gators played with a lot of intensity.

At the final buzzer, the Gator fans, what was left of them, gave a standing ovation to Mike White and his Florida Gators while Kentucky stood victorious over Florida, 88-79.

Florida now drops to an overall record of 17-13 and 8-9 in conference play. The Gators look to bounce back when they hit the road to take on Missouri on Thursday, before making a run for it at the SEC Tournament.

A senior at the University of Florida reporting on Gator sports, local Gainesville and surrounding area sports, and telling the stories of local athletes. Born and raised in Gainesville, Florida with a passion for telling people's stories and having fun doing it.
@SportsDarwinism
Previous Jimmie Johnson Wins in Atlanta, Ties Dale Earnhardt Sr In Wins
Next SEC WOMEN’S HOOPS TOURNAMENT: Florida Blasted By Kentucky