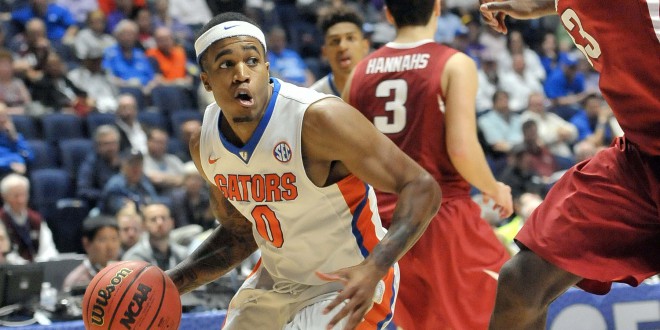 On Friday afternoon, the Florida Gators men’s basketball team will have a chance to prove themselves to NCAA Tournament Committee as it faces SEC regular season champion and 17th ranked Texas A&M in the third round of the SEC Tournament at 1 pm today.

The Aggies dominated SEC play this year, finishing as the number one overall seed in the conference with a 13-5 SEC record. The last time these two teams met, Texas A&M was able to pull off the late victory, taking down the Gators, 71-68 in College Station. This time, the game is in neutral Nashville.

Texas A&M is led by their three guard attack featuring Jalen Jones, Danuel House and Alex Caruso; all seniors. Experience has been a trademark for the Aggies this season, as TAMU features six seniors on its squad.

Within that three guard attack, each player has their own specialty. Jalen Jones is the team’s most prolific scorer, and can provide isolation offense whenever the Aggies need it. Jones, in the team’s most recent game against Vanderbilt, finished with 17 points on 6 of 14 shooting while adding 11 rebounds. Jones’ height, at  6’7″ has helped him lead the team in rebounding at 7.2 boards per contest.

Tall guards are a common theme at Texas A&M with Danuel House next up on the list. The 6’7″ combo guard is second on the team in scoring with 15.3 points per game. House’s sheer athleticism has been vital in the Aggies being able to spread their shooters effectively on the floor.

The final portion of the attack comes from Alex Caruso, the team’s floor general. Caruso racks up dimes for the Aggies, averaging a team leading 5.1 assists per game. As a team, Texas A&M ranks ninth in the nation in assists per game, largely thanks to Caruso. He dropped seven dimes in the team’s last game against Florida.

Florida’s final worry coming into Friday’s game has to be the Aggies’ 6’10” freshman center Tyler Davis. With an injured John Egbunu inside for the Gators, Davis could dominate the interior than usual. The Diaper Dandy has averaged 11.2 points and 6.0 rebounds per game this season, and has become the most efficient scorer in the SEC, knocking down 65.4% of his looks from the floor. Should Egbunu get in foul trouble, Kevarrius Hayes and Schuyler Rimmer could be in for an interesting day.

The Gators will look to carry momentum from their second round victory over the Arkansas Razorbacks on Thursday afternoon. Florida took down the Hogs, 68-61, and were really able to get the deep ball going in the second half. As a team, the Gators sunk 40% of their shots from beyond the arc, going 5 of12 from downtown in the second half. Despite being the second worst three-point shooting team in the SEC, when Florida gets it going from beyond the arc, they are one of the harder teams to stop on offense in the conference.

Kasey Hill and John Egbunu were the team’s saviors off of the bench in that contest, generating 26 of the squad’s 28 bench points. Hill finished with 18 points and five assists, while Egbunu finished with eight points and nine rebounds, including six offensive boards, despite a painful thumb injury. Many believe if the Gators can win this game, it could punch their ticket to the NCAA Tournament, and likewise, a loss would keep them out.

INJURY UPDATE: Texas A&M guard Anthony Collins is probable with a head injury. Florida center John Egbunu, after playing through a torn ligament in his thumb on Thursday, is probable. Forward Alex Murphy is out per usual with plantar fasciitis.

BROADCAST INFORMATION: The game tips off at 1 P.M. and can be seen live on the SEC Network with Brad Nessler and Sean Farnham once again on the call. You can listen to the game live as always on ESPN Gainesville 95.3 FM, with pre-game coverage starting at 12:25 P.M.