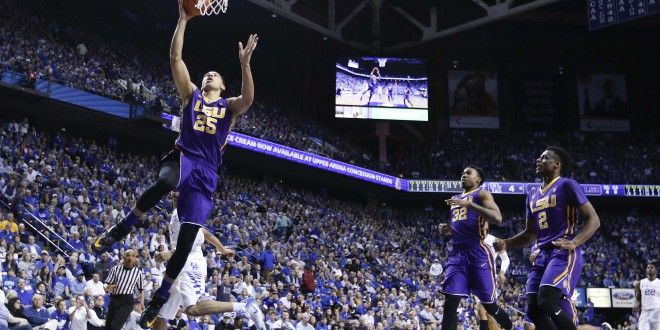 The Tennessee Volunteers (15-18) and LSU Tigers (18-13) men’s basketball teams will duke it out today in an SEC Tournament quarterfinal match up.

The 12th seed Vols upset fifth seed Vanderbilt yesterday afternoon 67-65. The game looked like it was headed for overtime until the referees determined Vanderbilt did not get a last shot off before time expired. Today’s game will be four seed LSU’s first appearance in the tournament.

Tennessee is one of two SEC teams that LSU has not beaten this season. In their last meeting, Tennessee defeated LSU 81-65 at home. The Volunteers lead the overall series against the Tigers 64-44.

LSU will look to freshman Ben Simmons to help spark the Tigers; he could be the top overall pick in the NBA Draft if he decides to turn pro after the season.  Simmons is also expected to become the first player ever to finish in the SEC’s top five for scoring (19.6 points per game), rebounds (11.9) and assists (5.0) all in the same season.

Tip off for today’s game is set for 3:30. The winner of this game will face Texas A&M.