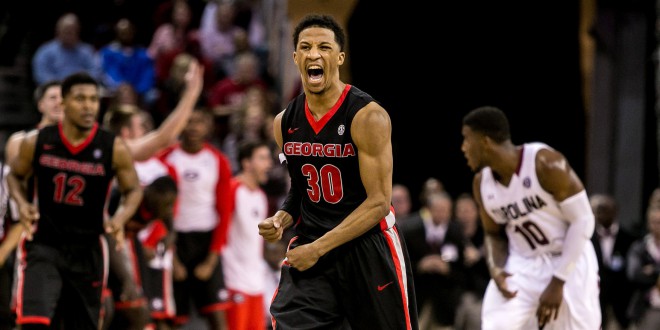 Senior Night did not go well for the South Carolina men’s basketball team just over a week ago, as they fell at home to Georgia 74-72. The Gamecocks will have a shot at revenge against the Bulldogs on Friday night at the SEC Tournament. UGA is coming off a 79-69 victory over Mississippi State in their first round matchup, while USC was able to sit back and scout thanks to a top-four bye.

Frank Martin’s crew is a projected 8 seed in the NCAA Tournament right now according to ESPN’s Joe Lunardi. A win over the Dawgs would likely keep the Gamecocks on that line, but another loss would send them much closer to the bubble than they would prefer.

The match up in Columbia back on March 3 featured a back and forth contest — Georgia led by nine in the second half before South Carolina ripped off a 21-7 run to take a five point lead. However, Mark Fox’s group stormed back in the final four minutes with large contributions from J.J. Frazier, who knocked down a three pointer with 90 seconds left to ice the game. He finished with 19 points. Mindaugus Kacinas led the Gamecocks with 21.

Expect Frank Martin’s game plan to be focused around containing the aforementioned Frazier and his backcourt mate Kenny Gaines. He’ll also need a better night from his leader Michael Carrera, who went just 5 for 21 from the field in that first contest.

Tipoff from Bridgestone Arena in Nashville is set for 9pm on SEC Network. The winner will face either Kentucky or Alabama in the semifinals on Saturday.