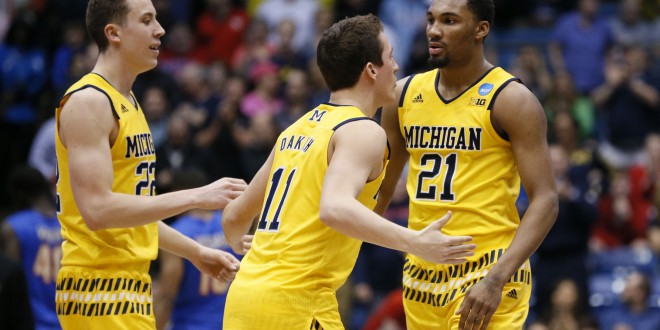 The First Four of the 2016 NCAA Tournament concluded on Wednesday with Holy Cross and Michigan both earning wins. Both teams will now play Friday night in the first round of the tournament.

Holy Cross defeated the Southern University Jaguars, 59-55, to earn the school’s first NCAA Tournament victory since 1953. Holy Cross finished the regular season on a five game losing streak before winning four straight games in the Patriot League Men’s Basketball Tournament to win the Patriot League. The Crusaders will enter the first round of the tournament with a 15-19 record.

Robert Champion led the Crusaders in the win against Southern with 19 points. With the game tied 52-52 with less than a minute to go, Champion hit a three pointer to take a 55-52 lead. Holy Cross point guard Cullen Hamilton made a couple of free throws to extend the lead, but the Jaguars hit a three pointer with 23 seconds left to bring Southern within two points. Champion sealed the victory with a couple of free throws with 14 seconds left, and the Crusaders won 59-55.

Following the game, Champion said the Crusaders just want to enjoy the victory before shifting their focus to Oregon. Holy Cross will face Oregon on Friday at 7:27 p.m.

Michigan defeated Tulsa 67-62 on Wednesday to return to the tournament after missing it last year.

The Wolverines held a 28-20 lead at halftime, but the Golden Hurricane came out strong in the second half and tied the game, 32-32, early in the half. The Wolverines were down by one with 1:09 to go, but Zak Irvin hit a three to give Michigan a 62-60 lead with 52 seconds left. The Wolverines never looked back from there and held on to win 67-62.

Irvin gave credit to Tulsa’s defense after the game and said Michigan was finally able to get some shots late in the game to earn the victory.

Michigan will play Notre Dame on Friday at 9:40 p.m.

Junior telecommunication student at the University of Florida. Passionate about all things related to sports.
@@EllenBazley
Previous We’re Talking About Practice: The Men Behind the Scenes of Gator Women’s Basketball
Next NHRA GatorNationals Kicks Off