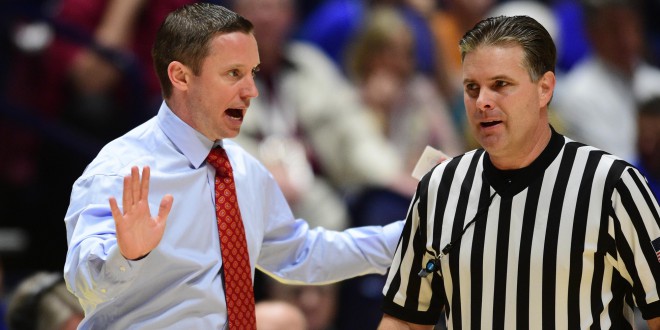 The Gators have not squared off against the Ohio State Buckeyes in the post-season since Gainesville, FL was Titletown, U.S.A. Back then, Joakim Noah and Al Horford commanded a dominate front-court, while Corey Brewer, the 2007 NCAA Tournament’s MOP, led the squad’s offensive attack. This Sunday, the stakes are different. Instead of duking it out for the NCAA Championship like they did in their last post-season meeting, the two teams will be fighting to get into the Elite 8 of the NIT, a less prestigious, but humbling honor.

In 2007, when the teams last met in the post-season, the Gators’ offense was explosive, with a deadly three-point attack led by the best shooter in Florida basketball history, Lee Humphrey. This time around, the Gators’ focus isn’t just scoring, but dominating the battle on the boards and locking down on defense.

Florida ranks 24th in the nation in rebounding, grabbing 40.1 boards per contest. Unfortunately for them, the team’s second leading rebounder, center John Egbunu, has been declared out for the season with a torn ligament in his right thumb. Egbunu had played through the injury in the SEC Tournament and in the first round of the NIT, in a 97-68 victory over North Florida. In that win the Gators only outrebounded the Ospreys, 35-33, but sunk 16-32 three-pointers, the most of any game this season, including 12 of 20 in the first half.

While the Buckeyes don’t have a potential superstar in the making in the post this time around(key word potential, sorry Greg Oden), OSU’s greatest strength this season has been their defense, which has allowed a stingy 68.0 points per game. The defense is led by sophomore forward Keita Bates-Diop, who has averaged 6.4 rebounds and 1.2 blocks per game. On offense, the Buckeyes are led by junior forward Marc Loving. Loving was dominate in the team’s first round NIT matchup, sinking seven of 17 shots from the field for 18 points while adding 13 rebounds.

The Gators are 4-8 vs. the Buckeyes all-time, but have not taken down Ohio State on the road. While this game would normally take place at the O’Connell Center, due to renovations, the game, as the Gators’ first round matchup was as well, has been moved to Value CityArena in Columbus. UF last took on OSU in 2011; Jared Sullinger was Florida’s kryptonite in that contest, scoring 16 points, grabbing six boards and racking up three dimes en route to an 81-74 victory.

INJURY UPDATE: Ohio State Forward Keta Bates-Diop is questionable with an illness. Bates-Diop missed the team’s first-round NIT matchup vs. Akron due to the same reason. Florida Center John Egbunu and forward Alex Murphy are both presumed out for Sunday’s contest.

BROADCAST INFORMATION: Sunday’s game tips off at noon and can be seen live on ESPN or the WatchESPN app with Dave LaMont and Dan Dakich on the call. The game can also be heard as always on ESPN Gainesville 95.3 FM, with coverage starting at 11:25 am.