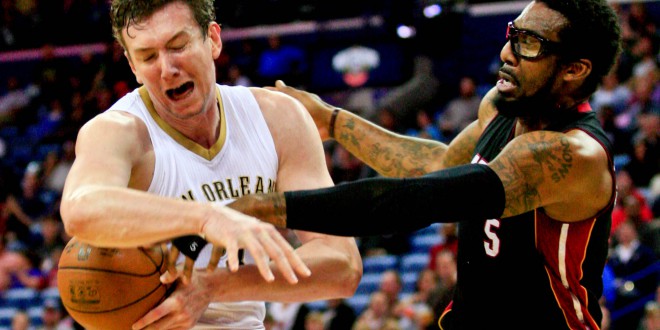 Coming off of an incredible win against ex-teammate LeBron James and the Eastern Conference’s No.1 seed Cleveland Cavaliers Saturday, the Miami Heat (41-29) left for New Orleans to add another win to their record.

The Heat did not disappoint Tuesday night when they dominated the game against the New Orleans Pelicans (26-44) and left with an away win, 113-99.

Fourteen points was not the biggest lead the Heat held over the Pelicans, though. After a Heat dominated second quarter that ended with a 19 point lead to make the final score of the half 59-40, Miami extended the lead to 22 points during the first half of the third quarter after a layup by guard Goran Dragic. During the second half of the quarter the Pelicans snapped out of whatever mindset they were, hitting more shots and driving in for layups to close the third quarter behind the Heat, 86-73. In the final quarter New Orleans continued to keep themselves with 18 points or less of Miami and even managed to narrow in on the Heat 96-91 with a three minute 13-0 run.

With six minutes left in the game, guard Dwyane Wade found center Hassan Whiteside for a quick layup to snap the Pelicans’s 13 point run. Fouled by New Orleans center Kendrick Perkins, Whiteside added another point right after snapping the run. After pushing to extend their lead to double digits, the Miami Heat never looked back and left the court with a 14-point win over the Pelicans.

For Miami, it was Wade who led the Heat in points with 25, followed closely by Whiteside who had for 24 points of his own. Whiteside, who hit 10 of his 11 shots and tied the Heat’s record for shooting off the bench, also made 14 of Miami’s 58 rebounds.

.@youngwhiteside says the @MiamiHeat have too much at stake to let games like Tuesday's slip away.https://t.co/MMaPdNycdv

With this win, Miami maintains its No.3 standing in the Eastern Conference, nine games behind the conference leading Cavaliers. The Heat have 12 remaining games to close the regular season, eight of which are against other Eastern Conference teams.

The Heat don’t have any time to revel in Tuesday night’s win, as they look to extend their win streak to three with a win against the No. 2 seed in the Western Conference San Antonio Spurs (59-11) Wednesday night. The Spurs are coming off of a 91-88 loss to the Charlotte Hornets after handing the Golden State Warriors their seventh loss of the season. Wednesday night’s match-up between Miami and San Antonio will be the second time the two teams have met up, a month after the Spurs left the city of Miami with a 119-101 win.

Previous Ray’s Defeat Cuba in Historic Day for MLB, U.S.
Next Vernon Hargreaves Likely to Be a Top-10 Pick in NFL Draft