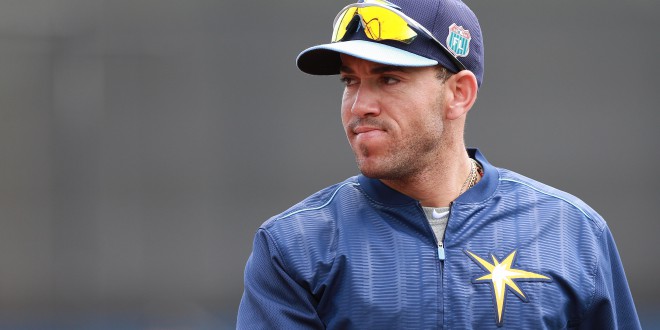 It was a historic moment, not only for Major League Baseball, but for the United States of America Tuesday afternoon.

With U.S. President Barack Obama and Cuban President Raul Castro sitting side by side behind home plate, Dayron Varona swung at the first pitch of an exhibition game between the Tampa Bay Rays and Cuban National Team, popping out to Cuban first baseman William Saavedra to begin an iconic day of baseball at the Estadio Latinoamericano in Havana.

The Rays, who ultimately won the showdown 4-1, were the first MLB team to play a game in Cuba since 1999. Much more importantly however, was the significance of Varona’s at bat. The Tampa Bay outfielder, a Havana native who left for the U.S. in 2013 to pursue a major league career, became the first baseball player ever to return to Cuba following a defection and appear in a game. While Varona finished the day 0-2 and was removed in the third inning for Steven Souza Jr., his appearance was the highlight of a game that represents the true power of sports.

Tuesday’s exhibition between the Rays and Cuban National Team was powerful enough to bring together the leaders of two countries that have struggled with a contentious relationship for more than a half-century, allowing them to sit next to each as if they were old friends. Obama’s appearance in Cuba was the first time the President of the United States had traveled to the country since Calvin Coolidge did 88 years ago, however that couldn’t have been any less evident as when he and President Castro joined in with fans and did “the wave.”

In actual game action, Obama and Castro were witnesses to a stellar performance from Rays first baseman James Loney, who went 2-2 with three RBI’s and a homerun. Tampa Bay starter Matt Moore added in six scoreless innings and three strikeouts to win his first game of the spring. For the Cuban National Team, they struggled to get on the scoreboard all day, tacking on their lone run on a solo blast in the ninth inning by third baseman Rudy Reyes.

However, they day will definitely be remembered less for a lack of scoring, and more for two world leaders putting aside their countries differences to sit down and enjoy a baseball game together.