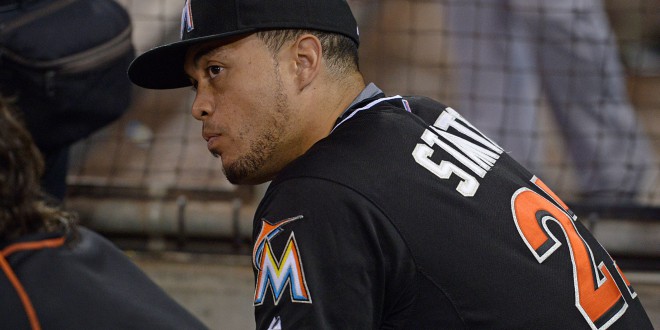 Stanton Hopeful to Bounce Back From Injury

Giancarlo Stanton is back training with the Marlins after his season ending injury, last year.

In September of 2014 Marlins slugger and star right fielder Stanton was hit in the face with a dirty pitch from Brewers starter Mike Fiers. The hit to Stanton’s  face caused multiple fractures and dental damage. With such significant injuries Stanton had to sit out the rest of the 2014-2015 season and recover.

With spring training in full swing Stanton is playing well and coming back strong he is batting an average of .286 and has a On Base Percentage of .429.

Before the injury, Stanton was batting an average of .265 and had an on base percentage of .346.

Today Stanton spoke about how he is moving on after the injury and says he can not stay passive at the plate going forward with the season.

Stanton has been showing up and showing out. In spring practice he has already hit two homeruns and this is just the beginning.

Out of the ballpark and over the clubhouse. Only Giancarlo!#MarlinsTime | https://t.co/OaIZbm0porhttps://t.co/SAYRqG8oJE

The Marlins are wrapping up spring training and are just few days away from opening night. They are scheduled to take on the Detroit Tigers at home on April 5 at 7 p.m. to open the season.