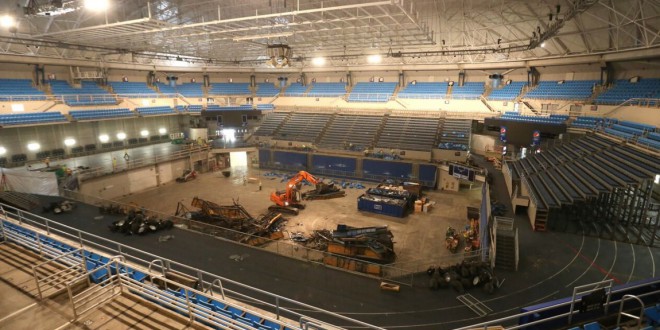 Demolition and renovation of the 36 year-old O’Connell Center is finally underway. The $64.5 million project is a combined effort between the University of Florida and the University Athletic Association, and general contractor Brasfield & Gorrie and Davis Architects.

“I think that experience is going to be second to none,” said Chip Howard, UF Executive Associate Athletics Director for Internal Affairs. “It’s a brand new arena. But I think the intimidation factor that we’ve had here at the O’Connell center is going to be there. Our fans are going to be right on top of the floor as they always have been, and the O’Connell center is going to as loud, if not louder, as it’s always been. So we’re looking froward to recreating that intimidating atmosphere that’s been here in the past.”

With the project running through the fall of 2016, the men’s and women’s basketball teams will likely travel to Jacksonville, Orlando, and Tampa to play “home” games. The Volleyball team will play their games at a local alternate venue.

Previous Warriors on Pace to Dethrone Jordan, ’96 Bulls
Next Stanton Hopeful to Bounce Back From Injury