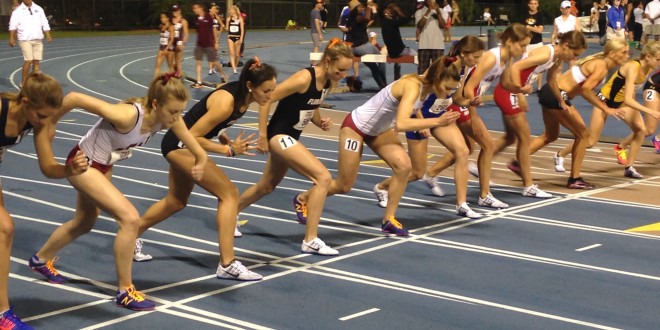 Although the second day of the Florida Relays was on April Fool’s Day, the Gators did not play around. Several collegiate, personal best and even world leading times were made by current and former Gators on Saturday.

In the women’s 100 meter hurdles Florida sophomore Skylar Ross-Ransom placed seventh overall and ran a personal best time wind aided time of 13.18. However, with it being wind aided it negated any personal records. Freshman Kimani Rushing and junior Ryann McEnany both ran personal bests, though wind aided, in 13.53 and 13.65, respectively.

In the men’s 110 hurdles, the race was won by former Gator and All-American Eddie Lovett, who currently runs professionally for the Virgin Islands. He took the race in 13.39 seconds, which established a new world leading time.

The Gators saw success on both the men’s and women’s side in the 100 meter dash. Freshman Ryan Clark sprinted to a 10.26 second time for the race. This was the second fastest wind legal time by a Division I runner this year with him placing seventh overall, competing against professionals in his race. Senior sprinter Shayla Sanders won the first place title overall in the women’s race with a time of 11.15.

The Gators swept the 400 meter dash with Robin Reynolds in first with a 52.09 and Kyra Jefferson in second with a 52.11. Reynolds, who is coming off of an injury during the SEC Indoor meet was pleased with her performance today but is still looking to improve.

The two posted the second and third best Division I leading times. Freshman Kunle Fasasi took the 400 meter crown in 45.43, which was also a new NCAA leading time as well as a personal best. ” I just want to keep running fast, PR’s and all, my major goal is the Rio Olympics,” Fasasi said.

The Florida Relays were more of a homecoming for 2014 Gator grad Cory McGee. McGee always looks forward to the races and is something she counts down the days for.  Currently running professionally for New Balance, McGee opened up her first meet of the outdoor season with a 2:02.73 in the 800 meter run, placing second to Nike athlete and former indoor world champion in the 800m and former Tennessee Volunteer, Chanelle Price.

Later in the evening the distance squads came out; Florida’s Taylor Tubbs (4:21.42), Becky Greene (4:22.09), and Elisabeth Bergh (4:25.73) ran times at or close to personal records, as well as times that will most likely punch their tickets to the NCAA Regional meet. Amber Johnson also ran a personal record of 4:31.10. They ran to Gator Assistant Track Coach Paul Spangler’s expectations, despite facing obstacles leading up to the meet.

“Elisabeth hasn’t done a workout in three weeks because she had two root canals and Taylor has been sick for a good week and a half, for them to come out and run a lifetime best or within a second of it, I was very very pleased.”

In the 3000 meter steeplechase Devin McDermott ran a personal best that was the seventh best mark in Gator history.

Saturday is the last day of the Florida Relays with finals of the relay races. Gates open at 8 a.m.

Previous No. 2 Florida Baseball Wins Series Opener Against No. 1 Texas A&M
Next Florida Loses To Alabama 2-1 in Softball Series Opener