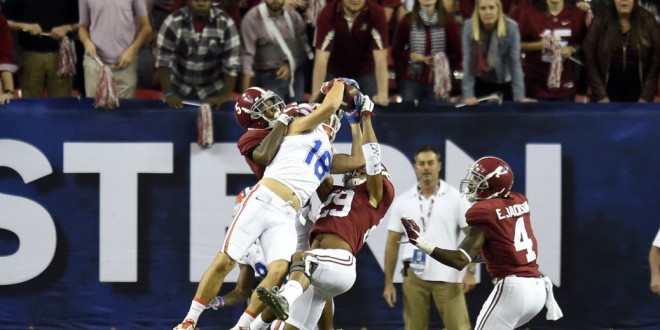 Florida Receivers Look to Impress During Orange and Blue Debut

Florida fans are hungry for the return of football, and they’ll get a taste on Friday night.

These spring practices have been essential to see who will fill the void that Callaway and Robinson left.  So far, McElwain is proud of the consistency the receiving core has shown.  McElwain says spring drills have shown him which guys have separated themselves from the rest of the group.

The group includes veterans Brandon Powell, Ahmad Fulwood, and Alvin Bailey, as well as Gainesville High receiver Chris Thompson.  McElwain says he is impressed with Fulwood’s spring performance.  Junior C.J. Worton might be the pleasant surprise Gator fans are searching for.  In 2015, Worton appeared in five games and caught a career-long 46- yard touchdown pass against Alabama in the SEC Championship.

Florida assistant and wide receiver coach Kerry Dixon II says Worton needs to focus on day-to-day technique, but he has the talent the Gators need.  The Gators also have strong prospects in the new recruiting class.  McElwain says Junior college transfer Dre Massey is a standout among the wide receivers.

Dixon is ready to see his receivers in action at Ben Hill Griffin Stadium.  This is his second year with the team. Dixon feels the repetition of the same offensive system will help the team succeed.  The returners can get comfortable competing in a system they already know and work to help the new guys.

Two of these new players include freshmen receivers Freddie Swain and Josh Hammond.  Dixon says there are similarities between the two players, but each has room to improve.  The offense has the best means to prepare for Saturdays in the Swamp, competing against a strong Florida defense.  Dixon says this is the best preparation for his group.

Both fans and coaches alike were disappointed in the Gator’s final performances of the 2015-2016 season.  The Orange and Blue Debut game on Saturday will be a good benchmark of progress in the offseason.