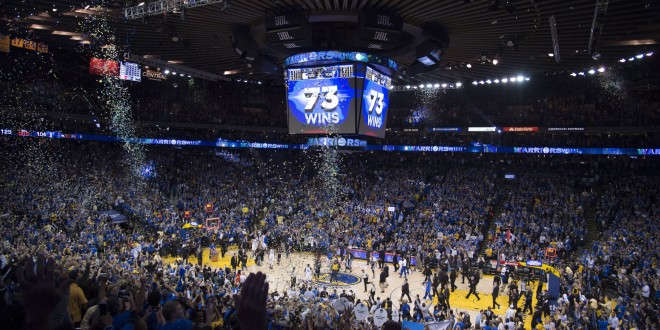 Last night the Golden State Warriors made history winning their 73rd game of the season, beating the Memphis Grizzlies at home 125-104.

The record was previously held by the 1995-96 Chicago Bulls (72-10), led by Michael Jordan. This year’s Warriors (73-9) is made up of a young team that defeated the odds and had the best performance by any team ever in the NBA.

After Golden State won the NBA Finals last year, the pressure was on for head coach Steve Kerr and his team to defend their title. During the regular season, they surprised everyone by winning their first 24 games, setting the record for best start for any professional team in any sport. The hot streak led many to believe that the Warriors could possibly end the season with the most wins in an NBA season.

The team’s standout performers included Draymond Green and the Splash Brothers, Stephen Curry and Klay Thompson. Curry, who won the league MVP last season, became an even bigger sensation for his performance this year. He continued his success last night in the record-clinching victory with 46 points (62.5 percent) including ten three-pointers. He also set an individual NBA record with 402 threes for the season, shattering his previous record of 286. Before the game, Curry knew he was close to 400 and though he was focused on the team and their goal he decided to go for the 400 when the first few went in. He also joined the 50-40-90 club, shooting 50.4 percent from the field, 45.4 percent from beyond the arc, and 90.8 percent from the free throw line for the season.

In last night’s game, the Grizzlies were led by Zach Randolph and Lance Stephenson who combined for 46 of the team’s 104 final total. However, Memphis could not overcome the 20-point deficit they faced at half time.

After the game, Green made sure he had the game ball when he left the court. As the emotional leader of the team, he expressed to the fans how thankful the team was for their support throughout the entire season. In the postgame interview, he expressed how difficult reaching those 73 wins was and how hard his team worked to get there.

Celebrating with the best fans in the league. #DubNation #GSWFanNight pic.twitter.com/unLNOGPTvJ

Congrats to the @Warriors, a great group of guys on and off the court. If somebody had to break the Bulls' record, I'm glad it's them.

The Warriors still have more to prove as the playoffs begin. Their first round matchup is against the Houston Rockets. This season Golden State went 3-0 against Houston. The first game of the series will be Saturday at 3:30 p.m. on ABC.