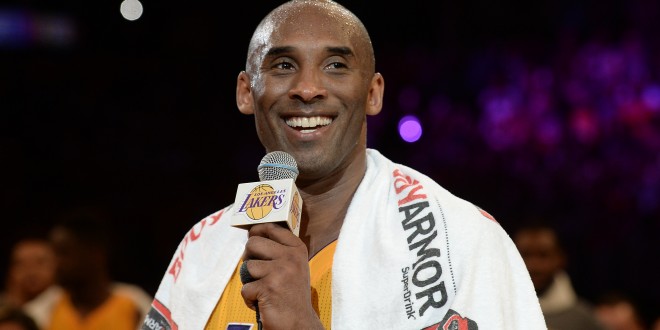 It wasn’t a storybook ending for Kobe Bryant the way he wanted to finish it, but nevertheless he put an exclamation point on his 20-year Hall-of-Fame career by ending it in remarkable fashion in the only way the Black Mamba knew how scoring.  Also, the Warrior won their 73 game and this night was special for fans everywhere.

Bryant scored a season high 60 points on 22-50 shooting against the Utah Jazz as the Los Angeles Lakers beat the Jazz 101-96. The third-leading scorer in NBA history gave the fans their final look at him in a purple and gold uniform as he led the fourth quarter comeback in route to the win. Celebrities, former athletes and Kobe’s kid came to the game to witness a legend retire and hang up his boots.

Kobe by himself had 23 points in the fourth quarter to outscore the Jazz’s team 23-21.

Watch as Kobe is introduced prior to his final game! https://t.co/9V4CjyvSbT

Bryant nailed a 3-pointer to close the Utah’s lead to one with less than a minute to go and then hit a jumper in vintage Kobe style to put the Lakers up one with 31 seconds left. He then made free throws to ice the game. Kobe exits the game to the fans chanting : Kobe, Kobe Kobe.

Fans wonder what could’ve been if Bryant was hampered by injuries in recent years, which made too many of his remaining contests a struggle, but get won the last game and got 60 points. Not bad to finish for a 20-year career with one team.

The 50 attempted shots by Kobe on Wednesday night is the most taken by anyone in an NBA game in the past 30 seasons. This was also the sixth game in his career he has scored 60 points and it marked them most points scored by a player in his last regular-season game. To show you how special this performance was, not even Michael Jordan in his final game reached 20 points. Jordan finished with 15 points with the Wizards against the Philadelphia 76ers on April 17, 2003. To even elaborate, no Hall-of -Famer has recorded 30 points in his last game. You have to go all the way back to 1978 to find someone that came close to 30 points (John Havlicek’s last game for the Boston Celtics, 29 points).

This performance for Kobe goes down as his fifth highest-scoring game of his career and he became the oldest player to score 50 points in an NBA game with this being his highest scoring game since dropping 61 against New York in 2009.

Another personal record that Kobe set last night was the amount of shots he took; 50. He broke his own previous career high in a loss to the Boston Celtics on November 7, 2002, when he had 47 shots.

Bryant is the fifth player in NBA history to play 20 seasons and joins Robert Parish, Kevin Willis, Kevin Garnett and Kareem Abdul-Jabbar, but he is the first with just one team. Tim Duncan could join Kobe as being with one team through his career for 20 seasons if he comes back to the Spurs for his 20th season.

Even after all of this, Magic Johnson called Kobe Bryant the best and the Black Mamba responded with his own take on it.

I love the way @kobebryant scored 60pts, said "Mamba Out" and dropped the mic! #ThankYouKobe

Bryant is going to do everything then basketball, but it is about finding something and giving it your all.