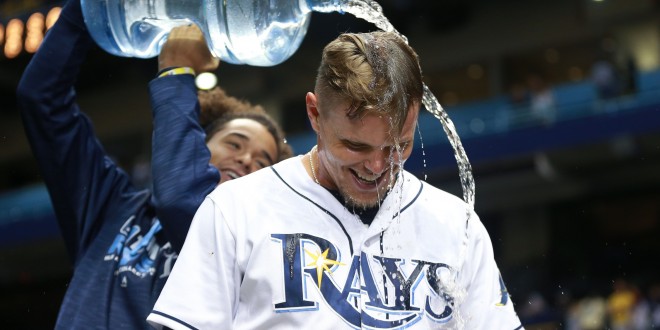 With Pitching And Hot Bats, the Rays Win First Series Of The Season

With the hot bat of Brandon Guyer and tremendous pitching of Matt Moore, the Tampa Bay Rays beat the Chicago White Sox 3-2 Sunday afternoon. This is the first series win of the season for the Rays.

Brandon Guyer tied a career high with four hits in the game.  He singled to left field in the first inning and Steve Pearce doubled to bring him home to give the Rays a quick 1-0 lead.

The top of the second inning was three up and three down for Rays pitcher Matt Moore. Moore recorded two more strikeouts in the top of the third, but the White Sox scored a run in the fourth.  Avisail Garcia was hit by a pitch and advanced to second on a single by Adam Eaton. Austin Jackson singled to right field to bring Garcia home to tie the Rays 1-1.

The Rays answered the White Sox in the bottom of the third. Logan Forsythe opened up the inning with a double and advanced to third on a wild pitch. Guyer singled Forsythe home to give the Rays a 2-1 lead. Evan Longoria then singled and Guyer advanced to second base. Later in the inning, Logan Morrison reached first base on an error by pitcher Jose Quintana. With this play, Guyer reached home and extended the Rays lead to 3-1.

Moore dominated as he earned three strikeouts in the next three innings. Moore started the top of the seventh with another strikeout, but the White Sox weren’t giving up. Brett Lawrie hit a double to left field and Garcia singled to center to being Lawrie home. With a 3-2 lead, Enny Romero came in to replace Moore. An inning later, Alex Colome came into replace Romero.

Five outs for your first save? No problem for @AlexanderColome.

Cash says that Guyer is a huge part of the Rays line up and it definitely showed. Besides his four hits, Guyer scored twice and drove in a run.

The Rays are off Monday as they travel to Boston as they begin a three game series on Tuesday. The Rays may see a familiar face when they face the Red Sox. Former Rays pitcher David Price signed a seven year contract with the Red Sox last December and he is scheduled to make a start in the series.

Senior telecommunication and history major at the University of Florida and contributor for ESPN Gainesville 95.3. Baseball and hockey are my favorites, but I love all sports.
@MichelleSpring6
Previous Braves Snap Losing Streak After Sweeping Marlins
Next Panthers Lose 4-3 in Overtime; Trail 2-1 in Series