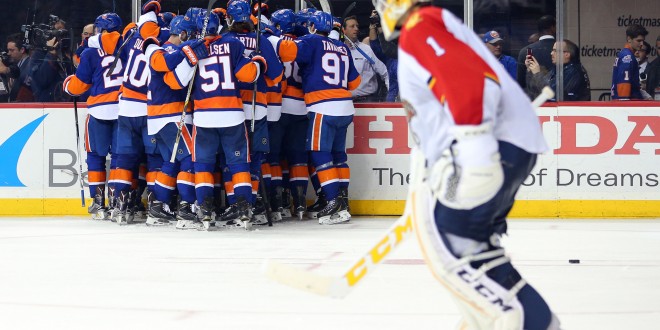 Apr 17, 2016; Brooklyn, NY, USA; The New York Islanders celebrate after scoring the game winning goal in front of Florida Panthers goalie Roberto Luongo (1) during the overtime period of game three of the first round of the 2016 Stanley Cup Playoffs at Barclays Center. The Islanders defeated the Panthers 4-3 in overtime to take a two games to one lead in the best of seven series. Mandatory Credit: Brad Penner-USA TODAY Sports

The Florida Panthers now trail their best of seven series with the New York Islanders after losing a hard fought 4-3 match up on Sunday.

Right-winger Reilly Smith got Florida on the board first and the Panthers would go up 3-1 until Islanders center Frans Nielson tied it on a power play in the second period. Both teams turned up the intensity in that period with 28 combined shots, 12 from the Panthers and 16 from the Islanders.

After going scoreless in the third period, defenseman Thomas Hickey scored a one-timer off an assist from Brock Nelson in overtime to give the Islanders their first playoff win in the Barclays Center and the 2-1 series lead. Islanders goaltender Thomas Greiss had 36 saves.

The Panthers’ penalty killing unit gave up two goals and goalie Roberto Luongo said the team’s penalties and mismanagement of the puck cost them the victory.

On a positive note, Reilly Smith has been outstanding for the Panthers, recording three straight multi-point games in this series.

Per @EliasSports: Reilly Smith is first in @FlaPanthers history to record three consecutive multi-point games in a single postseason.