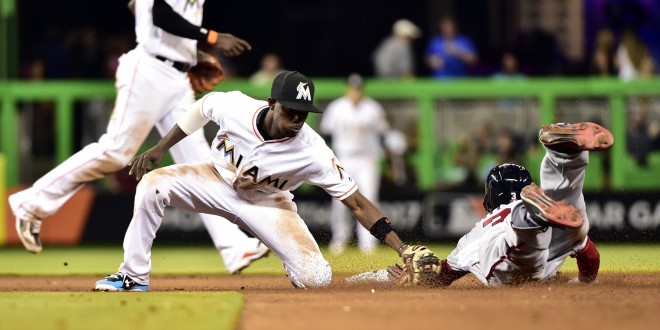 Marlins Win At Home Over Washington

Ichiro Suzuki continued his road to 3,000 hits last night, as he and the Miami Marlins took a 6-1 victory over the Washington Nationals. A five game losing streak for the Marlins has officially ended.

In just the first six innings, Marlins pitcher Jose Fernandez had a total of nine strikeouts. The pitcher held the Nats to one run the entire game. Fernandez threw 54 pitches in the first two innings but didn’t allow a hit until the fifth. He improved to 18-1 at Marlins Park, with the lone loss in his previous home start.

Washington’s Bryce Harper went 0 for 2 with a sacrifice fly. He had homered in his previous four games. Fernandez says Harper and the Nationals are dangerous.

Giancarlo (John Carlo) Stanton clouted his third home run of the season as the Marlins won for the first time at home after five straight losses. Mattingly spoke on how important this win was for his team.

After last night’s victory, the Marlins are hoping to continue their momentum as they take on the Nats again tonight, in the second game of a four-game series. The game is set for 7:10 p.m.