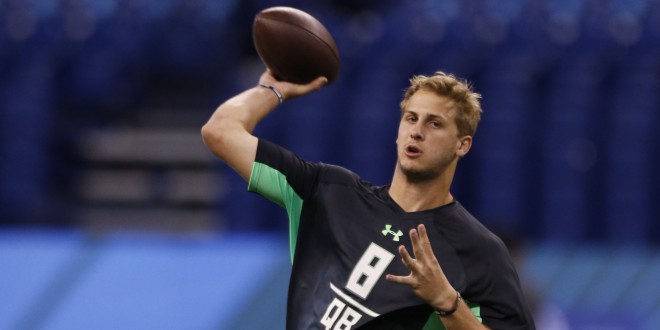 With the NFL draft kicking off in just eight days, deals continue to be made as teams jockey for draft position.  Today, the Philadelphia Eagles swung a trade with the Cleveland Browns that will allow them to have the second pick in this year’s draft, and most draft experts believe the Eagles will select a quarterback with the pick.

The draft will begin with the Los Angeles Rams picking first and then continuing with the Philadelphia Eagles, the San Diego Chargers, the Dallas Cowboys, and the Jacksonville Jaguars.

There seems to be a lot of talk surrounding which quarterback will be picked first. Whether it’s Carson Wentz or Jared Goff, analysts say the next great NFL quarterback might be drafted early.

CBS Sports Senior NFL writer Pete Prisco says while teams always look for a franchise quarterback to draft early, some teams may use first round picks on positions other than quarterback.

The Los Angeles Rams shook up the NFL Draft order via a trade with the Tennessee Titans so they could have the top pick in the draft.  Prisco says a top pick quarterback is worth the expense.

A number of former Gator players could be selected in this draft and many believe defensive lineman Jonathan Bullard, cornerback Vernon Hargreaves III and safety Keanu Neal could all be taken within the first two rounds of the draft.  Other Gators who could be drafted include linebacker Alex McCalister, tight end Jake McGee, linebacker Antonio Morrison, safety Brian Poole, wide receiver Demarcus Robinson, and running backKelvin Taylor.

Prisco says Jonathon Bullard is a player he expects to go in the second round and he also sees Keanu Neal being picked early. He also believes Hargreaves has a promising future as an NFL cornerback.

The first round of the draft will begin on Thursday, April 28th at 8 p.m. and will continue until Saturday at noon.