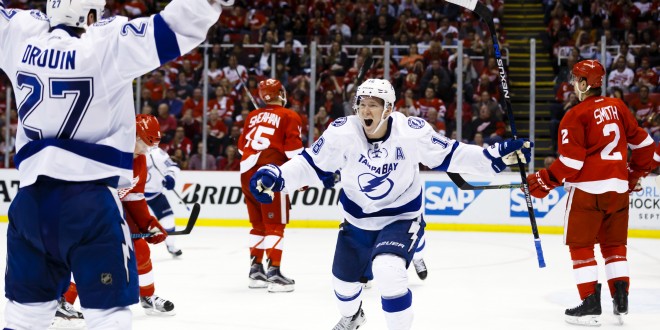 The 2016 NHL playoffs are underway with Tuesday night filled with exciting match ups.

The Tampa Bay Lightning picked up a hard fought win against the Detroit Red Wings last night 3-2. Lightning right winger Nikita Kucherov scored twice in the victory, where all of Tampa Bay’s goals came off power plays.  The winning play for the Lightning came from left winger Ondrej Palat who scored a power-play goal with 2:59 left in the third period. Goalie Ben Bishop made 26 saves in the win. Tampa Bay can end the series Thursday night at home when they face off against Detroit in game five at 7 p.m. It took the Lightning all seven games to eliminate the Red Wings in last year’s first round of the Stanley Cup Playoffs.

The St. Louis Blues beat the defending Stanley Cup champion Chicago Blackhawks last night 4-3. St. Louis’ right wing Vladimir Tarasenko scored twice to help the Blues win at the United Center in Chicago. Other goals for St. Louis came from left winger Jaden Schwartz and left winger Alexander Steen. The Blackhawks haven’t trailed 3-1 in a series since 2014 in the Western Conference Final, which they lost in seven games to the Los Angeles Kings. St. Louis can end the series Thursday night in Game 5 at 9:30 p.m.

The Pittsburgh Penguins defeated the New York Rangers last night 3-1 in Game 3 of the Eastern Conference first round playoff. Rookie goalie Matt Murray made his first Stanley Cup Playoff start in which he secured 16 saves. With his appearance Pittsburgh became the first team in NHL history to have multiple goaltenders win his playoff debut in the same series. Penguin’s center Matt Cullen scored a goal 4:16 into the third period to give the Penguins the win.

Nashville Leads Anaheim 2-1 in the Series

The Anaheim Ducks blanked the Nashville Predators last night 3-0 in Game 3 of the Western Conference first round series. Duck’s goalie Frederik Anderson made his Stanley Cup Playoff debut securing 27 saves as Anaheim took its first game of the series. Anaheim got goals from left winger Jamie McGinn, right winger Rickard Rakell and Chris Stewart. Nashville only had seven shots on goal, going 0 for 5 on power plays. Game 4 will be in Nashville Thursday at 8 p.m.