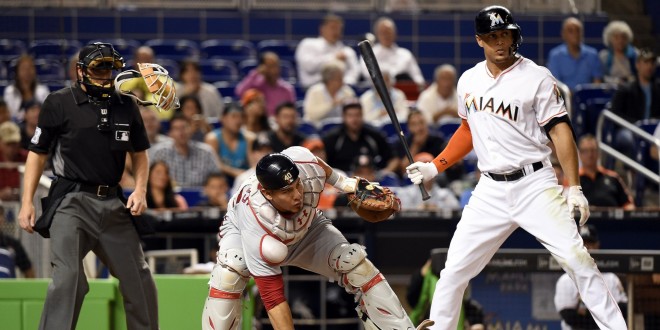 The Miami Marlins (4-9) lost their second game of a four game series against the Washington Nationals (11-3) yesterday 3-1.

When Nationals’ starting pitcher Joe Ross was taken from the game after only two innings due to a blister, the Marlins believed they had caught a break. However, they could not overcome their lackluster offense. Miami hitters finished the game with five hits, one walk, six strikeouts and zero at bats with runners in scoring position. Their lone run came from Derek Dietrich in the form of a solo home run in the fifth inning. Dietrich got the start at third base in place of Martin Prado.

So far this season, the Marlins are struggling to gain any kind of momentum to win multiple games in a row. With only four wins on the season, they have one of the worst records in MLB—only Atlanta (4-10) and Minnesota (4-11) have more losses. However, there is still plenty of season left to play. In order to turn it around, the Marlins will have to look to Giancarlo Stanton to improve his hitting as he bats in the four spot in the lineup. Last night, he went 0-4 with three strikeouts. Manager Don Mattingly said his batters will need to find a way to have better at-bats to get more opportunities to score.

In relief of Ross, veteran, Yusmeiro Petit, pitched four innings allowing only two hits and one run. Jonathan Papelbon pitched in relief in the ninth inning and got his sixth save of the season.