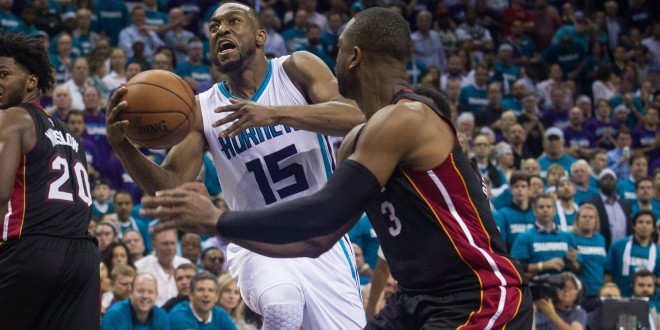 Going forward with a commanding 2-0 series lead is a very easy way to get over confident. And as the team who is down considerably, desperation starts to ring, and quick, drastic changes can be made. Some work out, others don’t.

Luckily for the Charlotte Hornets, their desperation has worked wonders.

After losing starting forward Nicolas Batum to injury and getting demolished in the paint the first two games of the series, Charlotte moved foward Marvin Williams down a position and inserted Frank Kaminsky and Al Jefferson as the starting big men. Since then, the flow of the game has been completely altered.

That was on display Monday night, as the Hornets dismantled Miami’s offense, defeating them 89-85 and getting the series evened at 2-2.

Charlotte’s Kemba Walker has been flourishing since that game as well, with the five year guard out of the University of Connecticut tallying 34 points and four rebounds in 40 minutes of action. With the size adjustment, the Hornets have been able to create better spacing, therefore allowing Walker the room that he needs to work.

Heat guard Dwyane Wade says that guarding a pick-and-roll player such as Walker is no easy feat at all.

The Heat were never able to really find anything consistent on offense after the first quarter. Their leading scorer, Joe Johnson, had only 16 points. Charlotte held Miami to just 39.5% shooting from the field, closing out quickly and forcing 17 turnovers in the process. Wade had 12 points and 10 assists on a sub-par 4 0f 11 shooting from the field, and with the primary scorer shut down, the Heat had no answer on who would fill the void. Luol Deng had 15 points, but took 14 shots just so that he could get there. The main cog needed to make the Miami machine work was Hassan Whiteside, who was limited to just 25 minutes of action because of some foul trouble. The young big man had just eight points and seven rebounds to go along with three blocks.

The Hornets are also playing with a shorter rotation, as they only played eight guys throughout the night. This allowed every player to get comfortable within the mood of the game, leading to stronger transitions of offense and more aggressive defense.

Guard Jeremy Lin came off the bench to score 21 points for the Hornets, and did it in 33 minutes of action. Lin has been able to provide a spark for a Hornets offense that isn’t considered too potent, especially with the loss of Nicolas Batum. Lin’s killer instinct, forceful type of play has been too aggressive for Miami player to stop consistently.

Although Miami was able to pull it close late in the game, the Heat were surely disappointed with their overall performance on the night. They were able to manage a meager 85 points in the game, and will need to make some offensive adjustments heading back to Miami. Heat coach Erik Spoelstra says that this game reminded him of an older style of retro, grind it out basketball. The Heat need to match this play, and match it quickly before it gets out of hand.

The series heads back to American Airlines Arena in Miami Wednesday night, now seeming to be equal in terms of skill. Whichever team can grab the flow of the game will have a huge one game advantage heading back to North Carolina. The game tips off at 8 p.m.