Home / College Baseball / No.1 Gator Baseball Travels to Columbia for Top 5 Matchup against No.5 South Carolina 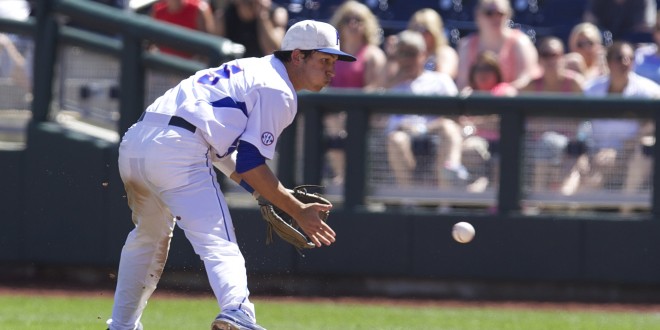 No.1 Gator Baseball Travels to Columbia for Top 5 Matchup against No.5 South Carolina

Florida Gator baseball is back to the No.1 team in the country according to the USA Today Coaches poll. This ranking came after a 3-1 week and the 2-1 series win over the Georgia Bulldogs this past weekend. The Gators also are No.1 in their RPI, meaning they have one of the toughest schedules in the country. Florida also has 36 wins under their belt which gives them the most wins in the country, they currently have their best start in school history.

Check out who's chasing @GatorsBB for the top spot in the baseball RPI – https://t.co/pBsie9jnIZ pic.twitter.com/zpMqCrUbdg

The Gators are currently 36-6 and 13-5  in the SEC. South Carolina is a win ahead of the Gators in the SEC East with the Gamecocks checking in at 14-4 in the SEC and 33-8 overall. This is a key matchup and a win will bring the Gators closer to the SEC regular season title. Sophomore infielder Dalton Guthrie, talks about the importance of this series.

Head Coach Kevin O’Sullivan is 19-11 against the Gamecocks and the Gators have six straight wins in the series. However, in Columbia, USC leads the series against Florida 23-15 but the Orange and Blue are 7-5 under O’Sullivan in Columbia.

The last time Florida and South Carolina faced each other was in 2015 and resulted in a UF sweep 3-0 in Gainesville.

This South Carolina series is the beginning of two back-to-back weekends on the road for the Gators facing Tennessee on the road next weekend.

“I really like the road trips, I really like hanging out with the guys on the bus, the planes and stuff but it’s a lot tougher to play on the road. I think it’s going to battle test us for the post season and hopefully we can play some good baseball” Catcher JJ Schwarz said about the away games.

The first game is on Friday night at 7 p.m on the SEC network. Saturday’s game at 7 p.m and Sunday’s game at 1:30 p.m. will be on SEC Network+. The games will also covered on the radio on ESPN Gainesville 95.3 FM for Friday and Saturday, while Sunday’s game will be on Country 103.7 the Gator.

Previous No. 1 Gator Softball Prepares for No. 18 Aggies
Next Bridget Sloan Will Walk Across the Stage as a Honda Award Recipient