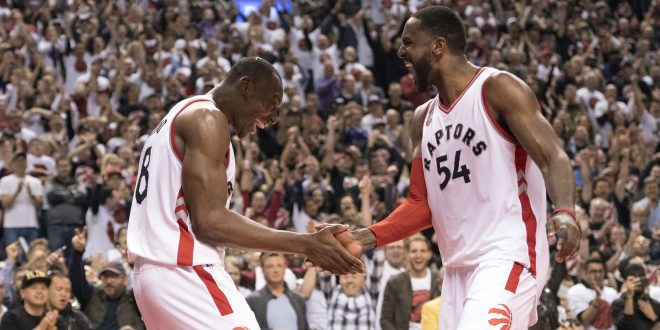 The Miami Heat’s playoff run is over as the Toronto Raptors won Game 7 of the NBA’s Eastern Conference semi-finals 116-89 Sunday night.

The Heat kept the game close, trailing only 86-78 after three quarters but the fourth quarter proved to make all the difference as the Raptors outscored the Heat 30-11 to win going away.  The Heat were just completely exhausted by the Raptor’s intensity according to Heat coach Erik Spoelstra. The Raptors in the first four and a half minutes went on a run outscoring the Heat 16-4 giving them a 20 point lead.

Kyle Lowry lead the way for the Raptors with 35 points, along with Demar Derozan scoring 28 points. Bismack Biyombo was dominant scoring 17 points and grabbing 17 rebounds.  The Heat were without center Hassan Whiteside, who averaged a double-double with 14.2 points and 11.8 rebounds for the majority of the series before he was injured in Game 3. This proved crucial as the Raptors outrebounded the Heat 50-30 in Game 7.

The Heat go home after this loss, only able to look forward to the next season.  There are no excuses for the loss, according to Spoelstra.  Heat guard Dwayne Wade,  expressed disappointment in not achieving their season goal of making it to the Eastern Conference Final.  Wade takes it a step farther than Spoelstra, when stating Toronto was the better team.  Wade posted 16 points, three assists and four rebounds.

At the end of the day, the Heat go home and Toronto moves on to its first conference final in the franchise’s 21-year history.  Toronto will meet the Cleveland Cavaliers who are yet to lose a playoff game this year (8-0), sweeping both the Detroit Pistons and the Atlanta Hawks.  The Eastern Conference Finals begin Tuesday with Game 1 in Cleveland.