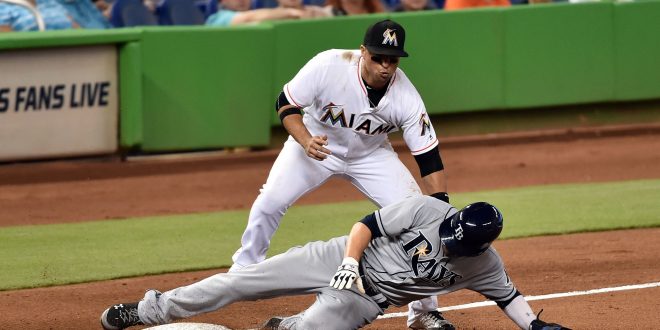 Share
The Tampa Bay Rays are home to take on the Miami Marlins in the third game of the series. The Rays are looking for their sixth win in the last seven games of the Citrus Series.
Matt Andriese toes the rubber tonight for the Rays and is looking for his forth consecutive win to open up the 2016 season. Andriese is 3-0 with a solid 2.11 ERA since being called up from Triple-A-Durham in May.
Marlins slugger Giancarlo Stanton will try to spoil Andriese’s plans but has been struggling at the plate recently. Over the last two weeks, Stanton has been hitting .146 with a .226 on-base percentage and a shocking 23 strikeouts. Stanton hit his 12th dinger of the season against the Rays Tuesday and hopes it will set him on the right track.

Giancarlo Stanton rounds the bases after blasting a solo HR! #Marlins on the board! pic.twitter.com/Sr1eZHTziy

Buster Olney on Giancarlos Stanton’s struggles
Source: ESPNAudio.ESPN.com
Marcel Ozuna also doubled twice in the game and has been on a tear over the last 30 games with a .389 batting average, seven home runs, and 16 RBI. He’ll look to continue that success tonight against Andriese and the Rays.
Marlins pitcher Justin Nicolino looks to get back on track as he has coughed up eight runs in his last two outings over 10 innings.  Nicolino’s record sits at 2-2 with a 4.30 ERA
Share