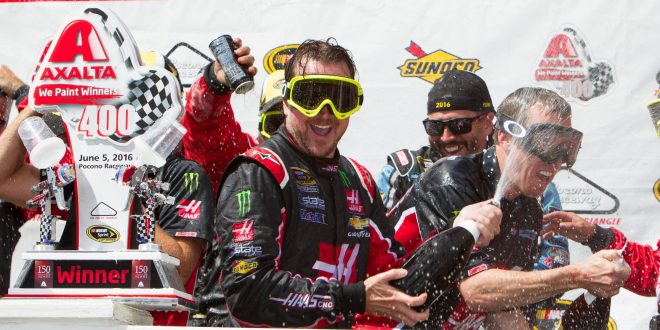 Kurt Busch Wins in Long Pond, Closes In On Harvick in Points Chase

Busch, who was driving the #41 car was short of fuel going into the last two laps, credits his conservation of fuel and the ability to make to have a strong final lap to his interim crew chief John Klausmeier.

Busch led for 32 laps to win his 28th career Sprint Cup race, moving him into a tie with Hall of Famer Rex White for 25th on NASCAR’s career wins list. He also has three wins at Pocono with three different teams and became the ninth driver to win a race this season.

Best feeling in the world to have the love of my life in victory lane. #trophygirl pic.twitter.com/2BW8TtYQTO

Second place finisher Dale Earnhardt Jr. who was in the #88 car came in second place during Monday’s nights race. Earnhardt says he lost the race on a restart. However, he does say he is satisfied with the second place win after not having the best month.

With this win Busch gained some ground on Kevin Harvick who is currently leading the Chase. Busch is 25 points behind Harvick followed by Brad Keselowski in third.

Kurt Busch will be the defending race winner at the Firekeepers Casino 400 at Michigan International Speedway on June 12 at 1 p.m.