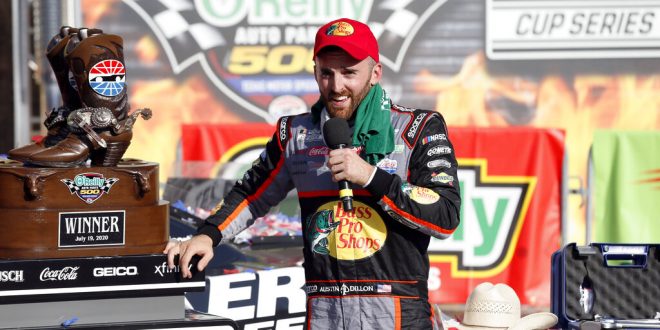 NASCAR driver Austin Dillon beat out teammate Tyler Reddick to win the O’Reilly Auto Parts 500 on Sunday. This was a 1-2 finish for the Richard Childress Racing team. It was a close finish with Dillion winning by .149-seconds. Before the race, Dillon was outside the top 16 that made the Cup Series playoffs. This victory moved him to no. 14, but the win at Texas Motor Speedway clinched him the playoff birth via automatic qualifier regardless.

According to NASCAR.com, this is Dillon’s third-career victory. He won the Daytona 500 in 2017 and the Coca Cola 600 in 2018. Dillon said this win stands out because of the battle to make it happen.

Driver Bubba Wallace finished in 14th. He sits outside the top 16, currently ranked no. 19 in the Cup Series.

The complete top ten from the O’Reilly Auto Parts 500 is listed below:

Harrison is a sports coordinator at ESPN 98.1 FM/850 AM WRUF. He served as a beat writer for Florida Gators football for the 2019 and 2020 seasons. He also contributes to WRUF's Gainesville Sports Center segments and makes appearances on the Clash on Harp on Sports. Harrison has been a content writer for WRUF since January 2019 as well.
@HarrisonSmaj
Previous 15 women allege toxic culture while working for Washington Redskins
Next Blue Jays Search for 2020 Home