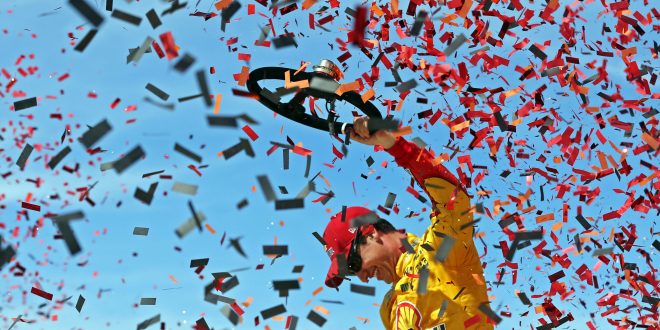 Joey Logano was the first to cross the finish line on the 200th lap  in the FireKeepers Casino 400 at the Michigan International Speedway—Logano led 138 of the 200 laps.

Logano dominated the race. The biggest challenge came on the 117th lap when Chase Elliott took the lead from Logano. Logano regained the lead in the 154th lap and led the rest of the day. He was happy to not only win this race, but winning in Michigan made it special.

Logano’s win bumped him up to three spots, from eighth to fifth, in the NASCAR point standings. Kevin Harvick remains the NASCAR standings leader, followed by Kurt Busch and Michigan native Brad Keselowski.

Drivers had a hard time keeping control of their wheel, which led to nine cautions on the track.

Elliott ended up finishing second. While leading, he missed a shift in gears and Logano jumped back into first place. After the race Elliott said “You can’t do dumb stuff and expect to win.”

Kyle Larson, third place finisher, failed the laser inspection for his car after the race. NASCAR will further evaluate Larson’s car and if penalties are given, it will be announced this week.

The next race for the Sprint Cup Series is June 26 at Sonoma Raceway in Sonoma, California at 3 p.m.