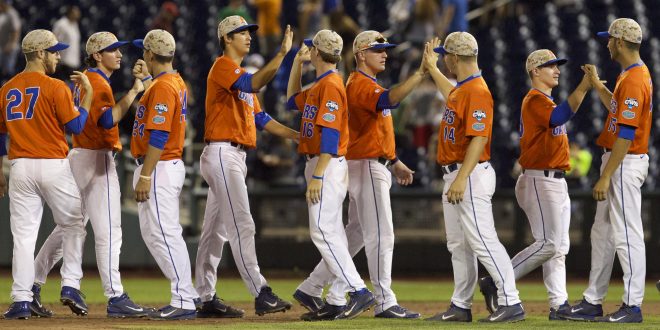 The Florida Gator baseball team (51-14) staved off elimination with a 5-0 win over Florida State (41-21) in Sunday night’s Super Regional match up from Gainesville.  Logan Shore got the win for Florida, pitching his 17th consecutive victory in his final start at McKethan Stadium. Tyler Holton shouldered the loss for FSU, giving up six hits and two runs through six innings.

Logan Shore earned three strikeouts in the first inning as Florida State left one runner on base and he continued to mow down hitters all night long.  Gator baseball coach Kevin O’Sullivan said Shore pitched a great game against the Seminoles.

In the third, Guthrie added a lead off single before a couple of wild pitches helped him advance to third base. Guthrie would then score for the second time by way of Peter Alonso’s ground out RBI, giving Florida a 2-0 lead.

Florida’s lead remained at two runs until the top of the seventh when Deacon Liput’s two-out single added two RBIs, giving Florida a 4-0 cushion.  In the top of the ninth, Alonso continued his offensive streak with a third double, and he scored on a JJ Schwarz double to make the score 5-0.

Shore entered the ninth inning before being replaced by closer Shaun Anderson, but the moment was undoubtedly special for the MLB-bound junior. Shore says he got chills running out onto the mound for the final time at McKethan Stadium.

Coach O’Sullivan says Florida’s entire season now comes down to one game and anything can happen in those nine innings.

Florida will play FSU for a final time on Monday. First pitch of the elimination game is set for 7 PM; ESPN Gainesville/95.3 FM and AM 850 WRUF has live coverage at 6:50 pm.