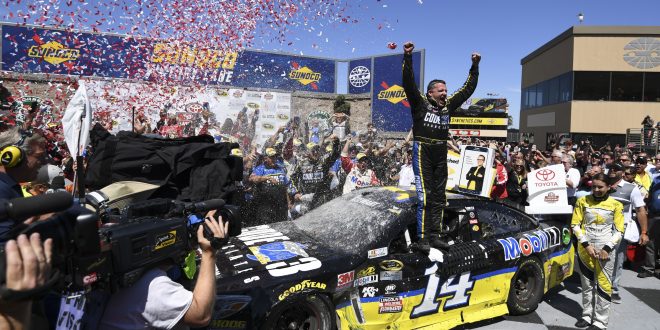 During Sunday’s nail-biting win, Tony Stewart ended an 84-race losing streak that dated back to June 2, 2013 at Dover.

After leading for the previous 19, the final lap of the Toyota-Save Mart 350 saw Stewart overtaken by Denny Hamlin after Smoke was caught wheel-hopping wide in the seventh turn.

Despite losing the lead in the race’s final moments, amidst his final year of NASCAR Sprint Cup Series action, Stewart took pursuit and bumped Hamlin into the 11th turn wall. Stewart came out of the turn with the lead and added 44 points to his Sprint Cup total when his No. 14 Chevrolet crossed Sonoma’s finish line.

ESPN NASCAR Analyst Ricky Craven says Stewart had some magic on his side during the final push, along with some great help by his team.

The victory puts Stewart at 32nd in the the Chase’s standings, nine points behind the 30th spot needed for eligibility. Despite the bump at the end, Hamlin finished second, .625 seconds behind his former Joe Gibbs Racing teammate.

A three-time Sprint Cup Series champion, Stewart says it’s important to earn this win at one of his favorite tracks, even if he doesn’t qualify for the Chase.

With his eighth victory on a road course, Stewart now has 49 career wins. Securing a first-place finish in his final season is monumental, especially considering the past three years have been riddled with injuries and a personal tragedy.

Next up in the Sprint Cup Series, on July 2nd the Coke Zero 400 will get underway from Daytona International Speedway. 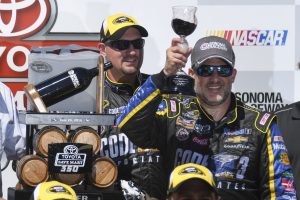 I'm a senior studying Political Science at the University of Florida. Multimedia Sports Reporter for ESPN Gainesville 95.3 and WUFT - Passionate about life, sports, and fitness.
@charliejordanuf
Previous Wimbledon Begins
Next Rays and Braves Look to Get Back on Track