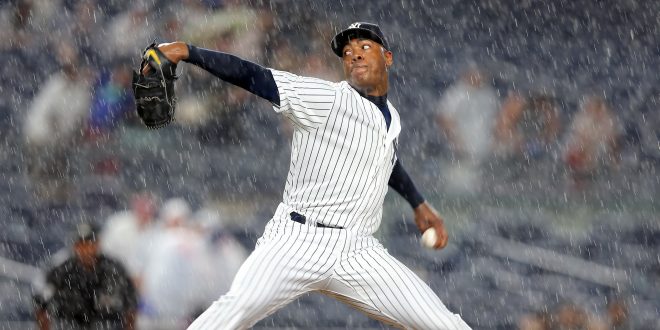 The New York Yankees and the Chicago Cubs finalized a deal on Monday that brings reliever Aroldis Chapman to the Cubs. By acquiring Chapman the Cubs have added a critical piece to their championship ambitions. Cubs president Theo Epstein says the Cubs pulled off this trade for one reason, to win a World Series.

Although Chapman missed the first 29 games of the season due to a suspension for violating the league’s domestic violence policy, he went 3-0 with a 2.01 ERA and 20 saves in 31 games with New York.

With the new player changes, the Yankees will have left-hander Andrew Miller step up as the closer. Miller says the bullpen will be fine without Chapman.

Meanwhile, the Cubs will assign former closer Hector Rondon to a new role in the bullpen as their set up man.

Chapman will have his debut with the Cubs Tuesday night when they face their cross town rivals, the Chicago White Sox. This will not be the first time the White Sox have faced Chapman this season; in May the White Sox played a series against the Yankees at U.S. Cellular Field.