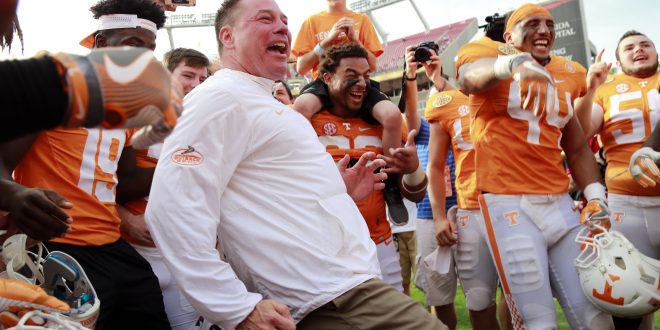 Tennessee football coach Butch Jones is well aware of the expectations heaped on his team this season. But being picked to win the SEC East for the first time in a decade isn’t fazing him or his squad — in fact, he says they’re ready to shoulder the burden.

The Vols open the season at home Thursday against Appalachian State in what Jones believes will be one of the most hyped crowds in Tennessee history. It’s natural, Jones says, that along with the high hopes for the team come the throngs of fans equally excited. For the first time in 15 years, the team sold out their season tickets, upwards of 70,000.

Those 70,000 prepare to watch their team battle against a surprisingly strong Appalachian State team. The Mountaineers were 11-2 last season in the Sun Belt Conference and have won 17 of their last 19. Jones knows this team can disrupt the Vols’ schematics, especially because they run the ball so well. The Mountaineers ranked sixth in the nation is rushing yards per game (271.5 yards) and they’re led by senior running back Marcus Cox, who finished with just over 1,400 yards last season. Tennessee, however, is no stranger to the running game either, ranking second in the SEC in yards per game (223.7) last season. With nearly all the key players returning this season, they edge out Mountaineers simply by way of having more weapons that can run.

The Vols will need to rely on their running game because State is more than adequate at defending the pass. The team ranked an elite 14th in the country in passing yards allowed at 182 yards per game. In their lone game against a ranked opponent last season (then-ranked #12 Clemson), they allowed 252 passing yards in an eventual loss.

Tennessee outshines the Mountaineers in special teams, led by punter Trevor Daniel and All-America return specialists Evan Berry and Cameron Sutton. But on a rare Thursday night opener, with a packed house, the home field advantage could be a difference maker for Tennessee. The key could be to put State away early. A close game at halftime mightl give the Mountaineers a fighting chance, and with hopes of putting Tennessee back on the national map, Jones and his team are hoping they can score an impressive win to open the season.