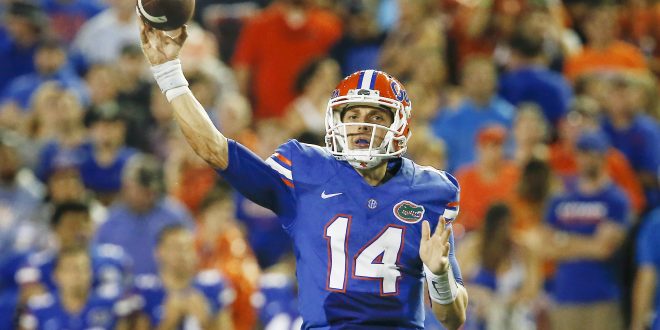 When many think of the rivalry between Florida and Kentucky, the first thing that comes to mind is the number 29.

Now, Florida looks to extend that streak another year. And Kentucky would love nothing more than to put an end to a dark piece of their history.

Florida head coach Jim McElwain wants to make sure that the number 29 doesn’t make his players any more comfortable heading into the Saturday’s 3:30 p.m. match up.

The Gators put up 24 points up against the Massachusetts Minutemen last week, looking lethargic through the first half. The offensive linemen had a hard time opening holes for the platoon of running backs the Gators used, while the aerial attack led by starting quarterback Luke Del Rio amassed over 250 yards through the air.

With a team that has won a combined seven games over the past three seasons giving Florida such a hard time, it’s clear that improvement is needed, and fast. The Minutemen’s small defensive front had only one player listed over 6 foot 2. Kentucky boasts three starting defensive lineman who are over 6 foot 3, and the same type of pass and run protection that was seen last week likely won’t hold up against this bunch.

The defense, on the other hand, held up its part of the job. They limited U Mass to just 187 total yards of offense and gave up only one score. With the return of starting corner back Jalen Tabor, who missed the first game due to suspension, other players will be able to play their games more comfortably. Senior linebacker Jarrad Davis, who totaled nine tackles in last week’s win, thinks the return of the All-SEC corner will greatly help the defense.

But while the Gators struggled to the finish line to secure its opening win, the Wildcats fell flat on their face, losing their opener to the Southern Mississippi Golden Eagles. Going in as the favorites, Kentucky looked like just that in the first half. At one point they took a 25-point lead near the end of the second quarter, holding a commanding advantage of 35-10. That would be the last time they scored.

Southern Miss went on to score 34 unanswered points with two touchdowns through the air and two more on the ground. While the defense was torched, the offense in the second half looked like an exact opposite of what was showcased in the first half. The team could only muster 46 second half yards after 363 yards in the first.

Kentucky head coach Mark Stoops knows that the collapse was something that cannot repeat itself, especially against an opponent such as Florida.

Sophomore quarterback Drew Barker will try to limit his turnovers after he coughed it up three times against the Golden Eagles, and the defense will probably have to play noticeably better as a unit in order to beat the Gators.

Both teams have much to prove as they head into their opening SEC action. Not only to the country, but themselves. If they can defeat a quality opponent, then that will boost confidence and help push momentum as both teams enter the thick of their schedule.

29 is the last thing on Florida players minds, but the first thing on Kentucky’s. Either way, both of them will leave The Swamp with a new number. 30 years of success, or one year of change.