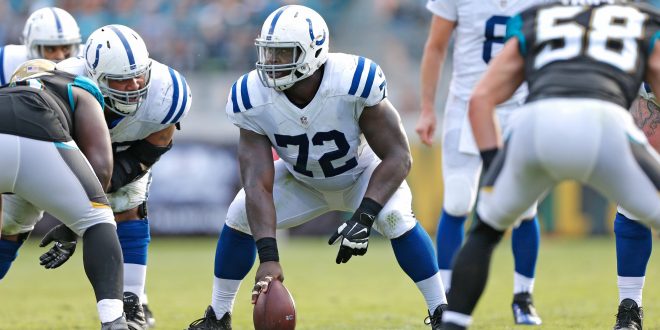 Once a Gator always a Gator. Offensive lineman Jonotthan Harrison played center for the Florida Gators from 2010-2014 under coaches Urban Myer and Will Muschamp. Harrison appeared in 51 games and started 19 during his tenure for the Gators. After going undrafted in the 2014 NFL draft, Harrison signed with the Indianapolis Colts as an unrestricted agent and has been with the Colts ever since. Entering his third year in the National Football League, Harrison has appeared in 32 games and has started 19 games thus far. Harrison and the Colts kicked off their 2016 season at home against the Detroit Lions.

The Colts offense didn’t really click until the second half but they scored an impressive 35 points in total. 17 of those points coming in the forth quarter alone. Still it wasn’t enough as the Colts fell to the Lions on a last second field goal 39-35—the last two points came on a safety.

Harrison spoke on watching tape of the game.

After the heartbreaking loss to the Lions, Harrison and the Colts will look to avoid an 0-2 start with a game on the road against the defending champion Denver Broncos. Lead by defensive stars Von Miller and Demarcus Ware, Harrison and his fellow offensive lineman will have their hands full in protecting Luck. That being said the, the Colts are 3-1 against the Broncos since Andrew Luck has taken over as the starting quarterback and the Broncos have only managed to sack Luck once in their last two meetings.

Harrison talks about the excitement of the matchup with Denver.

Harrison may be focused on his professional football career and up coming opponent, but he still takes the time to follow the Florida Gators. Harrison spoke on the Gators 45-7 victory over Kentucky this past weekend.