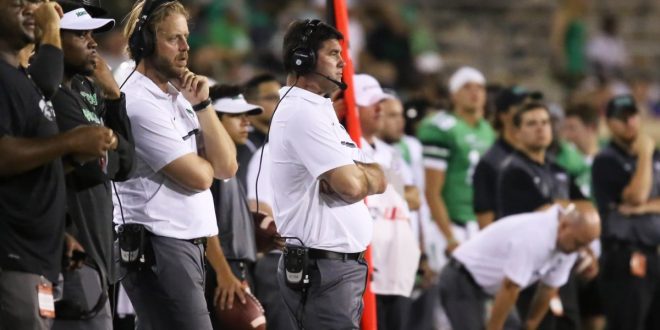 The North Texas Mean Green are off to a 1-1 start to the season, but head coach Seth Littrell knows the Florida Gators will be his hardest challenge yet. The Mean Green won their first game of the season last week against Bethune-Cookman, 41-20, but dropped their opener to SMU, 34-21.

Seth Littrell is in his first year as North Texas’ head coach after previously serving as UNC’s assistant head coach and tight ends coach for the past two years. Littrell discussed his team’s first two games during the current transition and explained how whether guys were transfers, recruits or had been with the team the previous year, the schemes and systems are new for everybody. After going 1-11 in the 2015-2016 season, Littrell knows he needs to switch things up to improve the program as a whole.

North Texas’ offense is fairly balanced, ranking 51st in the nation in rushing yards per game (206.0 YPG) and 74th in passing yards per game (216.0 YPG). The biggest question about the Mean Green’s offense has been their quarterback battle. Both Alec Morris (250 yards, 2 TD, 4 INT) and Mason Fine (182 yards, 0 TD, 0 INT) have seen action, and according to head coach Seth Littrell, both are supposed to play vs. the Florida Gators this Saturday.  Schematically, Littrell’s passing game has remained the same through his career at different schools, but the first year head coach wants to vastly improve his tempo vs. the Gators this week.

On defense, the Mean Green have been slightly below average ranking 80th in the nation in points against with 27.0 points allowed per game. Coach Littrell’s defenses switch up throughout the entire game, and he says that’s what keeps offenses on their toes. Against Bethune-Cookman last week, North Texas only allowed 74 passing yards and one offensive touchdown. The Wildcats’ two other scores came on an 88-yard punt return for a touchdown and a 30-yard INT return for a touchdown.

Coach Littrell knows that the Gators are a more complete team, but is not discouraged whatsoever. Littrell had high praise for Florida’s roster calling them “big, strong and fast,” while also complementing the team’s secondary and linebacker Jarrad Davis. At the end of the day, Littrell says that the most important thing is that his team improves week-to-week.

Saturday’s game between Florida and North Texas kicks off at 7:30 p.m. at Ben Hill Griffin Stadium. The game can be seen on ESPNU with Clay Matvick and Dusty Dvoracek on the call, and can be heard as always on the Gator IMG Sports Network with Mick Hubert, Lee McGriff and Brady Ackerman on the broadcast. The Gators and the Mean Green have not played each other since 1947, when Florida won 20-12. North Texas was still known as North Texas State at the time.