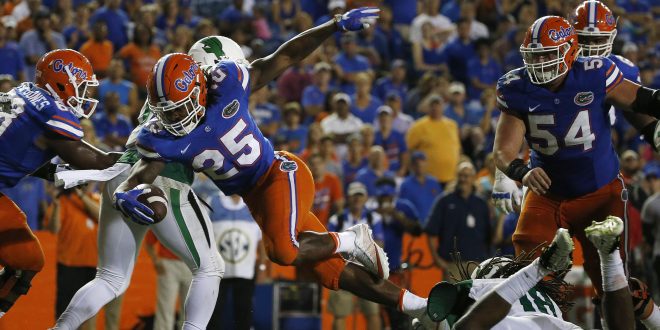 The Florida Gator football team pitched a shutout against North Texas, demolishing the Mean Green 32-0 Saturday in Gainesville. And just like in Florida’s two other victories this season, a running back by committee approach—featuring four backs—was highly successful again.

In the win over North Texas, all four backs—Jordan Cronkrite, Lamical Perine, Jordan Scarlett and Mark Thompson each scored a touchdown.

Cronkrite scored first, after runs of nine and 10 yards on the first two plays of the drive. He also caught a screen pass from quarterback Luke Del Rio for 15 yards and later ran it in from six yards out.

Cronkrite says having four quality backs on the field is good for the team.

Then it was Lamical Perine’s turn. Quarterback Luke Del Rio hit Perine for a 29-yard completion. Shortly after, he rushed for 12 and five yards and capped the drive with a two-yard touchdown run to increase Florida’s lead to 19-0.

After starting quarterback Luke Del Rio left the game with an injury, back up Austin Appleby entered the game. Running back Mark Thompson says Appleby was his first thought when he saw Del Rio go down.

Thompson finished a 74 yard drive with a 20-yard scoring run early in the fourth quarter to UF up 25-0.

Jordan Scarlett was the final one of the running backs to score, as he hit pay dirt with a one yard run touchdown run to push the score to 32-0.

Thompson says he is confident in Appleby’s abilities and he is an asset to the team because he is uplifting.

By the end of the night, Florida’s offense racked up 471 yards. with the backs having almost equal carries. Cronkrite finished with 46 yards, Perine with 57, Thompson with 85 and Scarlett with 62.

Thompson says he gets peace of mind knowing there are three other guys who can go in to the game and handle situations similarly.

The four headed running back monster will travel to Tennessee next Saturday for a big SEC East match up.