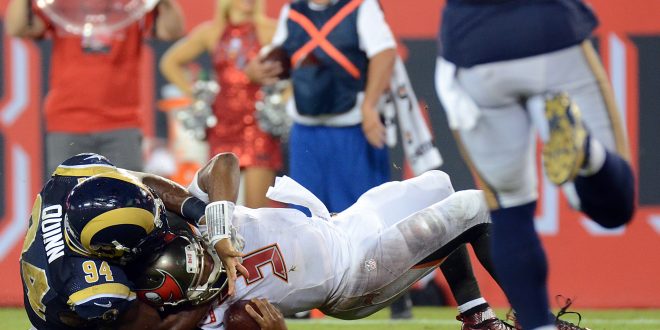 What seemed like a promising start to the season for the Tampa Bay Bucs in Week 1 has now turned into two consecutive losses for the team for a 1-2 record.

The Bucs looked to bounce back after last week’s 40-7 blowout loss to the Cardinals, but ended up coming short of a victory for their first home game of the season against the LA Rams by a final score of 35-32.

Despite Jameis Winston throwing for 405 yards and three TD’s, the Bucs were unable to overcome their mistakes in the game. Jameis Winston threw one interception and had a costly fumble that was returned to the house for 77 yards by defensive tackle Ethan Westbrook. That fumble gave the Rams the 31-20 lead in the game, after the Bucs led the entire second quarter.

The Bucs would end up scoring after, but the Rams would strike back to hold on to a 37-26 lead.

As it got with two minutes remaining, Winston connected with wide receiver Mike Evans, but failed to convert two points, to bring them within three.

Winston would have a chance to redeem himself  when the Bucs would get the ball with 1:42 left on the clock. Winston successfully drove it down the field and had a chance to score a game winning touchdown at the wire with four seconds ticking down. After multiple scrambles and looking from left to right for receivers, Winston would be tackled with no time remaining to end the game.

Winston blames himself for not being able to connect with any receiver at the end of the game.

QB @Jaboowins spoke to the media following the 37-32 loss to the Rams.

Winston and the Bucs will look to overcome come a loss once again, but have to face both teams that were in the Super Bowl the next two weeks—the Broncos and Panthers respectively.

@andresjimenezj4
Previous Has Fantasy Football Grown Too Large?
Next ‘The King’ of Golf Passes Away at Age 87