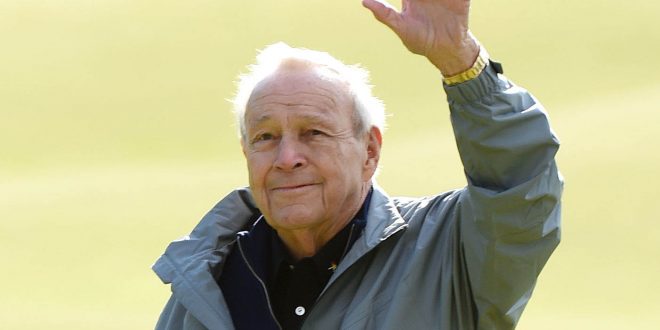 Jul 15, 2015; St. Andrews, Fife, GBR; Arnold Palmer takes the applause from the fans on the 18th green at the end of the Champions challenge at the 144th Open Championship at The Old Course at the Royal and Ancient Golf Club of St Andrews. Mandatory Credit: Ian Rutherford-USA TODAY Sports

‘The King’ of Golf Passes Away at Age 87

The trailblazer of golf who transformed the game into the sport it is today has been battling health complications for the past two years. Arnold Palmer passed away in Pittsburgh on September 25 due to “complications of the heart.”

Palmer is known to be golf’s greatest ambassador. He was part of the golden boy generation along with Jack Nicklaus and Gary Player which created a popularity around the game that the sport never knew until them. Nicklaus recalls a fond memory he has of his competitor, and good friend Arnold Palmer.

Palmer’s professional career began in 1955 where he won the Canadian Open during his rookie campaign. That win was one of 62 PGA Tour titles he collected during his career, including seven Majors. But he remained humble throughout his lifetime.

Along with his massive success on the course, arguably the biggest contribution Arnold Palmer made to golf was the way he took the sport to the common man. He represented the average working American, he wasn’t a country club type. His burst onto the golf scene coincided with the emergence of TV in the 50s and 60s. Through his charisma and grit people fell in love with him, including the cameras.

Soon companies came after Arnold Palmer for endorsement deals. Notable companies such as Coca-Cola and Ford Motors as well as many others came calling for Palmer to be the face of their company. He racked up endorsements from many different industries putting his face out there as well as the sport of golf.

Palmer understood the business world, he trademarked his name including that famous umbrella logo in 1968.

His legacy will always live on.

Thanks Arnold for your friendship, counsel and a lot of laughs. Your philanthropy and humility are part of your legend.

Originally from Ocala, Florida. University of Florida Class of 2017. Avid FIFA player willing to beat anybody. Follow me on Twitter for everything you need to know!
@JoshLaSelva
Previous Bucs Drop Home Opener to Rams
Next Vin Scully’s Last Broadcast at Dodger Stadium